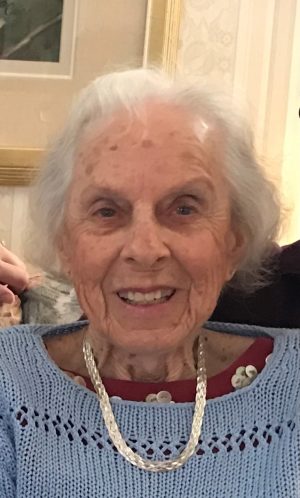 Virginia Alford Claybrook passed into the loving arms of her Savior on Sunday, October 10, 2021. She was 94, being born February 9, 1927, in Texas. She was predeceased by her husband of 55 years, Fred W. Claybrook.

Virginia, the daughter of Robert and Mae Alford, met Fred when he was stationed in Texas for training in WWII; they married after he had returned from deployment in Germany and she had been graduated from Baylor University. They moved frequently during their life together, living across the country and in England as Fred was transferred by his company. Along the way, they were blessed with three children and their spouses, Frederick “Rick” (Laurelyn) Claybrook, Karen (Carl) Dufendach, and Douglas (Shelly) Claybrook. Virginia is survived by all of them, nine grandchildren, and twenty-two great-grandchildren. Three of her brothers predeceased her, and she is survived by her sister, Jane Alford Spiller, and brother, Dan Alford.

While her health allowed, Virginia was actively involved in churches where she lived. After she and Fred moved to the Grand Rapids area after his retirement, they were active at Calvary Undenominational Church, and she later attended Magnify Church. Wherever she was, she made close friends readily, and she was known by all for her generous spirit and gracious hospitality.

Virginia will be interred next to her husband Fred in Kilmarnock, Virginia, where services in her honor will be held.

To send a message of sympathy to the family, sign Virginia’s online guest book, or to share a favorite memory, please visit: www.MichiganCremation.com