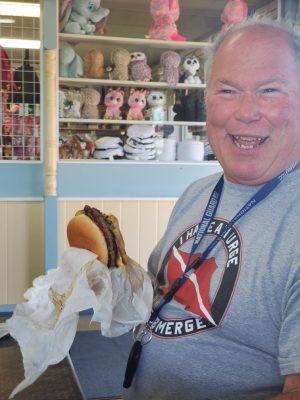 Royal Lee Streicher Jr., age 61, of Fennville, Michigan, passed away unexpectedly on Sunday, August 15, 2021.  He was born August 30, 1959, in Holland, Michigan, to the late, Royal and Wanda (Harbison) Streicher Sr.  Royal graduated from Holland Public High School with the class of 1977, where he played football, and met the love of his life, Tamula “Tammy” Lynn Vander Yacht.   They married on May 23, 1980, in Holland at Trinity Reformed Church.  Royal followed his father in trade as an owner operator truck driver.  He hauled many different types of loads such as, refrigerated, nursery stock, steel, Christmas trees, and dump truck.

Royal was a man of many interests.  Among his hoard of many treasures, you would find scuba equipment with antique double hose regulators, hot rods, engines, car parts galore, motorcycles, minibikes, Schwinn banana seat bikes, tractors, farm equipment, Mack trucks, boats, trailers, wood working equipment, hunting gear next to pictures of his beloved hunting dogs, fishing gear, scale models, model trains, tools, classic movies, and history books just to name a few.  But, to those who knew him best.  Roy’s true passion was found in his big heart.  He helped family and friends in any way possible, usually in the form of a good mechanic and someone who knew things.  He played Santa Clause at the Pullman VFW for many years.  Roy was happiest when playing, swimming, and scuba diving in lakes with his grandchildren, and telling his many colorful stories of the exceptional life he lived.

Royal was preceded in death by his parents; daughter, Melanie Streicher; and mother-in-law, Nancy Vander Yacht.

To send a message of sympathy to the family, sign Royal’s online guest book, or to share a favorite memory, please visit: www.MichiganCremation.com