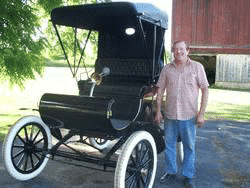 Share
Tweet
Share
Roger Melvin Berens, age 77, passed away late Tuesday night, September 17, 2019 at Ely Manor with his family at his side.
Roger was born August 8, 1942 in Zeeland to Melvin and Madeline (Knobloch) Berens. He lived near Burnips all of his life, graduating from Hudsonville High School in 1962. In the summer of 1989 he married Deborah Denise Wells and together they shared 30 years of marriage. He was a long time member of St. Peters Lutheran Church.
Roger was hired into the General Motors Stamping – Kalamazoo Plant in 1966. He received his Tool and Die Makers Journeymans card on February 28, 1977. Then in 1977 he left General Motors to help on the family farm where he grew up, until his brother returned.  In 1981-1982 Roger was a supervisor for Quality Steel Company. In 1982 he left to work as a mechanic, utilizing his skill set at Burnips Equipment. During this time he also worked for Pitches Wrecking. On April 25, 1983 he returned to General Motors at the Grand Rapids Metal Plant, retiring from there in 2004 after 32.5 years.
Roger had a great mechanical mind and was able to solve many problems and keep things running at GM and various jobs he held. He was considered a Master Craftsman and was often called a modern day Einstein.
He spent many hours in his garage building Pennsylvania and Kentucky Long Rifles. In 1976 Grand Rapids Press published an article suggesting that at that time he had built 25 rifles and 25 pistols, turning out his own locks, carving the stocks and all the fancy engraving on the hard to get maple wood stocks. Many family and friends received these beautiful rifles and it is unknown the total number he built.
Roger was most proud of the 1903 Oldsmobile that he built himself.  He considered it one of his greatest accomplishments. He spent many hours going back and forth to Lansing Olds Museum researching to ensure it was as close to the original as possible.  It took him 8 years to complete; he was proud of the fact that members of the Oldsmobile Club considered it as close to an original and mentioned his car in one of their newsletters.  A beautiful mechanical work of art.
Roger owned a 1923 Model T Roadster; his knowledge of such cars was extensive. It was purchased prior to 1964, and restored in his great-grandparents house. In fact, he had to tear down the house walls to remove the car when it was finished. Roger was so dedicated to the car; he left his first wife alone on their honeymoon to search for parts for this Roadster – a funny story to tell over the years. There are many memories shared of family road trips going to the Allegan Grubs, having hotdog roasts, and driving around with friends drinking beer. He was fascinated by hit and miss engines. He often went to shows to check them out. He built a smaller version of one for his grandson PJ.
Roger had a special bond with his grandson, Paul. They spent many hours together working in the shop on various projects. They built a cabin for Paul out of skid lumber in the back of Roger’s property and often worked on lawn mowers together.
Roger opened his home to many people over the years and considered them family.  He was a very giving person, who never asked for anything in return.
Roger was preceded in death by his parents, Melvin and Madeline Berens; and grandson, P.J. Beaudoin. He will be lovingly remembered and sadly missed by his wife, Deborah; children from a previous marriage, Wendy & Tom Young of Ada, Dianna Berens & Troy Brown of Burnips, Tony & Joy Berens of Pine City, Minnesota, Roger Berens & April Young of Gun Lake; step-children, Deborah Wells & Kevin Mast of Pullman, Rick Wells of Plainwell, and Jake Wells of Holland; 11 grandchildren; 13 great-grandchildren; mother-in-law, Margie Fields; sister, Bonnie & Ted Reuschel; brother, Boyd & Cindy Berens; sisters-in-law, Suzanne Yoster, Angela Houle, Sherry Muellar, and Annie Yoster; brothers-in-law, Jimmy Ashmun, Mikey Yoster, Danny Yoster and Terry Yoster; along with many other beloved friends and family.
The family would also like to thank the staff at Ely Manner who cared for our Dad, especially his aid Pam whom Dad called “Ma”. Her loving care for Dad showed in many ways, every time she walked in you could see it on his face that he felt her love and care for him.  We would also like to thank Wings of Hope Hospice for their care of Dad for the last 2 years of his journey.
Visitation with the family will be at 10:00 A.M. on Saturday, September 28, 2019 at St. Peters Lutheran Church, 4125 18th St, Dorr, 49323. A celebration of life will start promptly following visitation at 11:00 A.M.  A luncheon will be held at the church immediately following the ceremony for family and friends to remember and honor Roger.
Instead of flowers the family asks for contributions to Wings of Hope Hospice in Roger’s memory.
Stories, Memories and Photo’s please send to:  dianna.berens@yahoo.com
To send a message of sympathy to the family, sign Roger’s online guest book, or to share a favorite memory, please visit: www.MichiganCremation.com.
Cremation arrangements are entrusted to Michigan Cremation & Funeral Care, Grand Rapids.