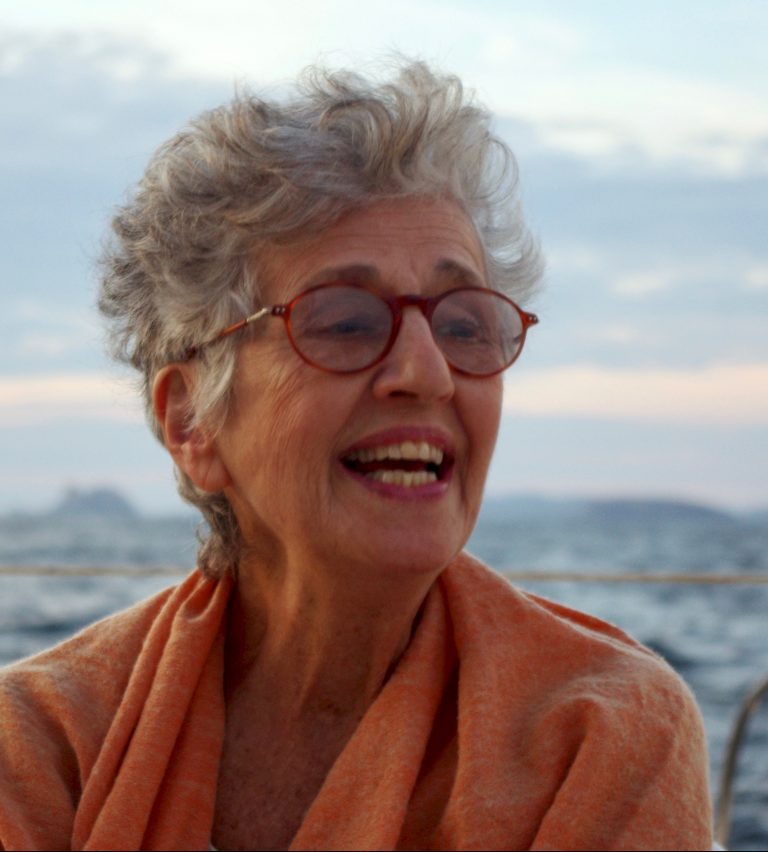 Myra Nissen died September 16, 2020, a few months shy of her 85th birthday. She suffered from advanced dementia and spent the last couple of years in a memory care residence in Kalamazoo, Michigan, near her family, but she was a New Yorker through and through.
Born December 4, 1935, to Jewish-Russian immigrants, Myra grew up in Yonkers and Hartsdale, NY. She briefly attended the University of Michigan but, die-hard city girl that she was, soon transferred to Columbia. An actress in her youth—her claims to fame were having done summer stock with Richard Burton and with Dustin Hoffman, the summer before he went off to film “The Graduate”— Myra didn’t pursue a stage career, though she never really left the theater or stopped performing. She held varied jobs: Myra worked at the Ford Foundation, modeled shoes for Pappagallo, wrote for Principal magazine and the Practicing Law Institute, spent years in the travel and tourism industry writing newsletters for The American Society of Travel Agents and The Greater Independent Association of New York Travel Services, read aloud to clients at the Lighthouse for the Blind, led walking tours of Harlem, served as an official Big Apple Greeter, and taught English as a second language to newly arrived immigrants in New York. She loved introducing people to the City, and to Shelter Island, where she and her husband, Tony (1938-2006), built a home in 1974 and spent nearly every weekend and summer there for thirty years. Myra hosted visitors constantly and was known to give over her homes to guests—friends, strangers, relatives and acquaintances—whether she could be there with them or not; she wanted everyone to know the places she so dearly loved.
For over a decade, Myra was a central member of Quest, a lifelong learning community in Manhattan. Four days a week she taught and attended classes in this thriving group of peer-educating seniors, and it was the Quest community and the amazing opportunities offered her there that got her through the years of caring for Tony, at home, during his long decline and death from Parkinson’s. Myra was always working on a presentation on Guastavino architecture, or the paintings of Alice Neel, doing readings for her Great Plays course, or taking on a role in A.R. Gurney’s “Love Letters” for her enthusiastic Quest fans. Myra usually went to the theater at least three nights a week — Off-Off-Off-Broadway, workshop group subscriptions, shows in pre-preview, you name it. She saw every movie the week it was released, was a regular at New York museums, played Mahjong, took entire courses on the novels of Henry James and George Eliot’s Daniel Deronda, and was known for her fabulous cooking. She studied French all her life and traveled extensively—as often as she could to France, where she and Tony still have many dear, dear friends.
Myra’s survived by her only child, daughter Thisbe Nissen; her especially beloved son-in-law, Jay Baron Nicorvo; and her grandson, Sonne Niscorvosen, who already shares his Mymy’s feistiness and love of theatrics. When it’s once again safe to travel, we’ll bring Myra’s ashes—and Tony’s, and those of Myra’s phenom of a one-eyed cat, Winken—to scatter over the lake at Annecy, France.
In 2019 Myra was briefly hospitalized after one of many falls. When she arrived in the Kalamazoo E.R., the staff tried to assess her condition, asking the usual questions: her name, the date, who the president was… “Oh,” she exclaimed, her face turning sour, like she’d eaten something bad, “that horrible man!” Friends have asked where they might make a donation in Myra’s honor, and she would have thought no cause more urgent right now than the Biden-Harris campaign. Otherwise, she’d’ve certainly appreciated a gift to Bideawee, where she and Jay found and adopted Winken.

To send a message of sympathy to the family, sign Myra’s online guest book, or to share a favorite memory, please visit: www.MichiganCremation.com