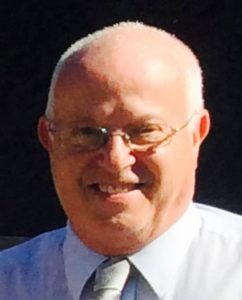 Michael Leslie Stepleton, age 79, passed away peacefully at home on April 6, 2022 surrounded by his loved ones. He was born on January 5, 1943 in Delphos, OH to Anthony Joseph and Daisy Mae (Etter) Stepleton, who preceded him in death.

He proudly served in the United States Air Force from 1962 – 1966. He was stationed in Turkey and Pease Air Force base in New Hampshire. He married Carol (Siebeneck) Stepleton on June 21, 1969.

Mike used his amazing gift for numbers while working as an accountant and then a computer operator at General Motors / EDS for more than 36 years. He also used this gift for numbers as a card shark while playing cards against friends and family. After retiring, his desire to be involved in the community led him to be a crossing guard at the local school in Livonia, MI. He enjoyed chatting with the kids and their parents and frequently passed out candy. He loved taking his grandkids with him to crossing guard when they were in town.

Mike had an inner drive to serve others. This was apparent while a parishioner at St. Sebastian in Dearborn Heights, MI. As a member of the Dad’s Club, he was always helping in some capacity at the pancake breakfasts, newspaper drives, and manning the BBQ for the chicken dinners at the festivals. Mike was the neighbor we would all love to have. After a heavy snowfall, Mike could often be seen snow blowing the sidewalks and driveways on his street. He was also the first to bring a meal to someone suffering the loss of a loved one. Mike was so generous with his time, talents, and treasures.

Mike was his girls’ and grandkids’ biggest fan. He would travel hours to watch them play and take stats for their teams. He never missed a game. He enjoyed coaching the girls’ basketball and softball teams. Mike enjoyed golfing, bowling, and rooting for his sports teams. He had a garden full of vegetables that the grandchildren liked to help tend. He had a friendly competition with his neighbor to see who would harvest the first red tomato.

He is survived by his wife, Carol Stepleton, two daughters, Susan (Todd) Creagan, Christine (Sean) Gregory, son in law, Christopher Siese, sister, Beverly Hipsher, eight grandchildren, and many nieces and nephews. He is preceded in death by his daughter, Annette (Stepleton) Siese and brother, Anthony Stepleton.

Memorial donations may be made in Mike’s name to Spectrum Health Hospice, give.spectrumhealth.org or a charity of your choice.

To send a message of sympathy to the family, sign Mike’s online guest book, or to share a favorite memory, please visit: www.MichiganCremation.com.