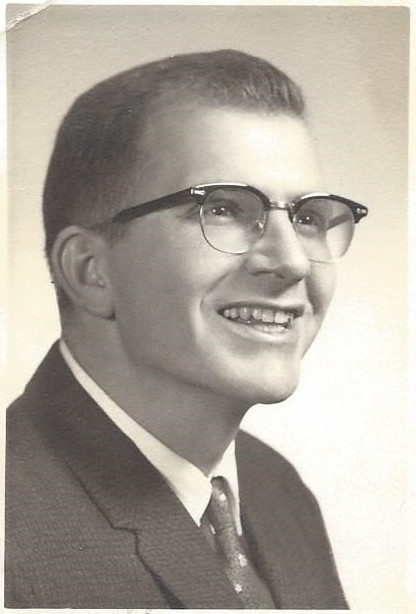 The son of Eugene and Edith Pearl (Owen) Greenwood, he was born on August 4, 1931, in Alma, Michigan. Following his graduation from high school, he worked as an accounting clerk at North Star Gravel Company until entering the United States Army, where he served stateside during the Korean War.

After his discharge, he began as a clerk with the United States Postal Service and served many years as Postmaster at Sumner, Michigan. Joe retired as a Postal Systems Examiner at Lansing, Michigan after over 30 years of service.

On July 20, 1963, in St  Johns, Michigan, he married Martella Leigh Sturgis. Together they enjoyed nearly 57 years of marriage and raised three children.  Joe dearly loved his wife Martella. Their courtship took place by letter writing. He saved every letter she wrote him. He loved to sing and would often wake his children with song. He enjoyed doing amateur (ham) radio with his son, Jonathan.  Joe most enjoyed spending time with family and friends and teaching truths from God’s Word the Bible. He was a baptized Jehovah’s Witness and familiar with the thought at Ecclesiastes 9:5 which says, “For the living know that they will die, but the dead know nothing at all.”

He recognized that throughout the Bible death is likened to sleep. Jesus Christ himself referred to death as sleep at John 11:11-14. These Bible truths helped Joseph to see that death is more or less like sleep, awaiting on Jehovah God to awaken you. He took comfort in the words of Psalms 37:11, “The meek will possess the earth, and they will find exquisite delight in the abundance of peace. ” Also, the hope at Psalms 37:29, “The righteous will possess the earth, and they will live forever on it.”

Now Joseph awaits the time of resurrection to be reunited with family and friends, right here on earth.

Joseph was the youngest of seven children. He was preceded in death by his parents (Eugene and Edith), five brothers (Vachel, Howard, Gene, Roy, and George) and one sister (Florence).

The family wishes to thank everyone for their loving support. We look forward to the time when “death will be no more” Revelation 21:4, and when “those asleep in the dust of the earth will wake up” Daniel 12:2.

Honoring his wishes, no service will be held. To send a message of sympathy to the family, sign Joseph’s online guest book or to share a favorite memory visit: www.MichiganCremation.com