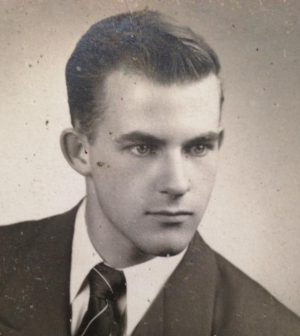 John Herman Nieboer, loving husband, father of 6, grandfather of 7, and great grandfather of 4 passed away peacefully at the age of 87 on November 1, 2020. John had an “appointment with Jesus”.

John was born March 8, 1933 in Kalamazoo, MI. to Harm and Cornelia (VanElk) Nieboer. After graduating from Kalamazoo Central High School, he served 4 years in the Navy aboard the USS Stoddard as a Gunners Mate 3rd Class. John loved being in the Navy as he was able to travel the world.

On July 13, 1957 John married Janet Rae Miller to whom he was married to for 63 years! They raised 5 sons: Warren, Larry, Matt, Mark, John, and 1 daughter: Julie. John and Janet resided in Richland for more than 50 years.

John loved gardening, raising animals, and working for the City of Kalamazoo for 33 years where he loved to plow snow on the streets of Kalamazoo. John was always willing to help anyone at any time. John was a very active member in his church family (New Hope Church, Richland, MI.) He was also known to have quite the sweet tooth!

A private service will be held at Ft. Custer in Battle Creek to honor John’s service in the United States Navy. A memorial service to be announced at a later date.

John’s family would like to dedicate this poem to his memory:
He never looked for praises
He was never one to boast
He just went on quietly working
For the ones he loved the most.His dreams were seldom spoken
His wants were very few
And most of the time his worries
Went unspoken too.

He was there….. A firm foundation
Through all our storms of life
A sturdy hand to hold on to
In times of stress and strife.

A true friend we could turn to
When times were good or bad
One of our greatest blessings
The man that we called Dad.
(Credit to author: Mary-Ann Spriggs)