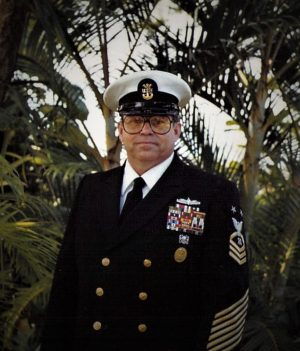 Our beloved John left us Friday, January 21, 2022, at the age of 78.  We’ll all miss him; his wife, children, friends, and shipmates.  John was a very special man; he was loving and kind, very good at his job, and he was fun.

HTCM/MDV John A. Searcy was born April 29, 1943, in Port of Spain, Trinidad.  He was raised in the Panama Canal Zone.  Living in Panama gave him lots of experience with exploring jungles and the ocean.  This prepared him for his future in the Navy.

John belonged to the Eagle Scouts and competed in the annual Cayuco Race through the Panama Canal.  To qualify, everyone had to swim a mile.  The race was a three-day event that took months of training.  Much of it done in Gatun Lake.  Boat preparation was supervised by John’s father who created the Explorer Post adventures.

John graduated from Balboa Highschool and enlisted in the Navy in 1963.  His boot camp was at Great Lakes.  His first ship was the USS Lake Champlain; one of the missions at that time was retrieving space capsules and astronauts when they came down in the Atlantic.

In 1967, John suffered a severe injury to his leg in a car accident.  After many months in the hospital, he was allowed to stay in the Navy.  He would gain notoriety for not correcting the idea that the scar on his leg was a shark bite.  John was married to Linda Havermale (Searcy), the mother of his first 4 children, from 2/14/70 – 1/23/84.  He was stationed in Subic Bay and worked in and out of Vietnam with Harbor Clearance Unit 1.

John served 31 years in the Navy, became a Master Diver and Command Master Chief.  He married his high school sweetheart, DeAnn Eva Wright, in Panama City, Florida on February 17, 1984.  One of his proudest times was being the Master Diver aboard the newly built USS Salvor.  After the ship was commissioned in 1986 in Sturgeon Bay, Wisconsin, they took it through all the Great Lakes and picked up four tows before transiting the Panama Canal and onto its home port at Pearl Harbor, Hawaii.

He was stationed in Subic Bay when Mt. Pinatubo erupted.  Saving the dive locker and staying safe was the job until he was evacuated.

John retired in 1994 at Pearl Harbor.   He worked five years at the Divers Institute of Technology in Seattle and for the Air Force as a diving supervisor in Okinawa, Japan before retiring again in 2009.

As a gift to DeAnn, the couple settled and made their home in Pennsylvania.  It was here that John made models of the ships he had either worked on or had been stationed on.  He made a large model of the USS Constitution.  John traveled and enjoyed visiting friends and family.  He and his brother made a trip to Panama to see all of the changes.