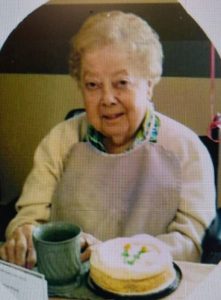 Joan L. Henderson, of Hudsonville, Michigan, passed away of age-related causes, on Sunday, May 1, 2022, at the age of 91. She was a resident of Brookcrest Christian Nursing Home of Grandville.

She and a girlfriend went to a dance one weekend. It was at the dance she met the lover of her life, Chuck Henderson. He told her he “worked for the government.” She was impressed…turned out he did! He was a sailor on leave. They fell in love and married on August 4, 1951.

Joan was the quintessential sailor’s wife. She followed him to each port of call, regardless of what coast. She was always willing to pack everything and move again. She was a master of keeping the household intact while Chuck was gone. In the 1960’s, Chuck was stationed on an aircraft carrier in Vietnam. She would write letters every day to keep him in touch about “his girls.” Chuck remained in the U.S. Navy for 20 years and retired. Sadly, soon after retirement he was killed in a car crash. Once again, she was in charge of “the girls.”

Joan quickly found work at various venues, but enjoyed retail the most. She worked at Meijer’s in Jenison for many years. She retired at 75 due to arthritis.

Her greatest joy was being able to watch her grandchildren, Nicole and Brian, grow up and have families of their own. She loved being part of their lives, driving them to sports events and seeing them become successful individually. Her yearly trips to Las Vegas were always a source of great memories and adventures. Her weekly trips to the hairdresser were a must! Her hobbies were doing laundry (which she loved), staying in touch with friends, spoiling the family pets, and playing bingo.

Several special people were part of her life, which allowed us to have her longer. Cindy, her daughter, worked at all the facilities she was in, which assured the very best life possible! Melissa Schmidt (Lexi and Austin) was always around! That was so appreciated! The care team at Brookcrest were amazing. Special thanks to Maxine, Jo, Faith, Michelle and all the loving staff, and to Emmanuel Hospice for their help, service and love.

Joan’s life was a life well lived. She will be missed. Funeral services will be announced at a later date.

To send a message of sympathy to the family, sign Joan’s online guest book, or to share a favorite memory, please visit: www.MichiganCremation.com