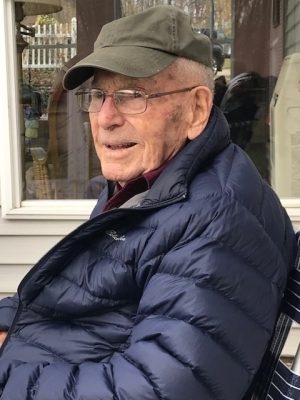 George William Bradshaw died on May 9th 2022 at the age of 92 at his home surrounded by his family.  George was born on June 24th, 1929 to George and Jessie Bradshaw in Orangeville, Michigan.  George is survived by his loving wife, Frances (Chrisman) Bradshaw.  They were married for 68 years.  George is the father of George William Bradshaw III (Lee) and Sandra Kay Pillars (Joseph).  He is the cherished grampa to Travis John Try (Abby) and Rachele Try- Angelo (Luke).  He is the grandfather of Christopher James Bradshaw.  He is “grampi” to his great- granddaughters, Morgan M. Try and Ella Frances Angelo.  He is preceded in death by 12 brothers and sisters and is the last member of the family from Orangeville to pass away.  George and Frances lived in Plainwell most of their married life and later moved to Big Lake in the Martin area.

George was a proud U.S. Army veteran serving in the Korean war. George worked at Georgia Pacific for 21 years and later retired from the Plainwell Public Works Department.

George’s greatest joys in life were his grandchildren and great- granddaughters. His favorite thing in the world was having company at the lake.  He could sit on the deck with you for hours and look at the lake. He loved watching for hummingbirds and looked up at every single airplane that passed over.  He was a single engine pilot when he was young until he clipped the power lines while buzzing his house.   He loved telling that story and many more.  Some stories were shared at show-and-tell by grandkids because they were believed to be factual, such as; Canadian Geese let the hummingbirds ride on their backs when they fly to Mexico for the winter because their wings are so tiny.

He really enjoyed life with his wife, going out dancing with friends, playing cards, going on cruises and renting cottages at Gravel Lake.  He lived life to the fullest and loved all the simple things.

He was everyone’s favorite uncle, best friend, best grampa and most loving father and husband.  He would always walk you to your car when you left or stand at the window and wave when you drove away.  When his walk slowed down to a shuffle he would still try to beat his wife to the door so he could open it for her.  He was a gentleman to the end and he battled the disease of Alzheimer’s until his very last breath.

In lieu of flowers, memorial contributions may be made to Wings of Hope Hospice in Allegan.  According to his wishes cremation has taken place.

Due to increasing Covid numbers we will not be having a reception after the service.  Please join us at the lake over the summer to remember my dad and all that he meant to everyone that he met.  His beautiful smile and the twinkle in his eye will be missed by his family, friends and very special neighbors that helped our family through his last battle. He was dearly loved.

To send a message of sympathy to the family, sign George’s online guest book, or to share a favorite memory, please visit: www.MichiganCremation.com