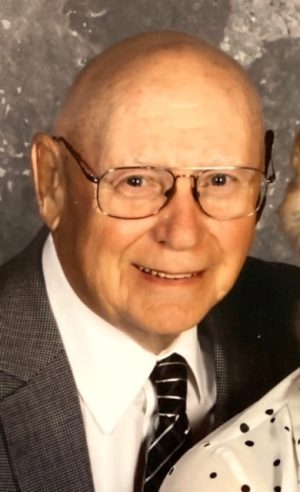 On December 8, 2021 Frank Schram went to be with his Lord and Savior at the age of eighty-nine. He was preceded in death by his beloved wife Norma Schram after a marriage of 43 years, a son-in-law Tim Wolthuis, and his many brothers and sisters.

He was a veteran of the Army in the Korean War. For years he owned his own business Schrams Carpets and Flooring, and many in the area have benefited from his expertise in installation and flooring services. He made many trips to Florida where he could fully enjoy his favorite sports of golf and bocce ball. He was an active member and served as a devoted elder at Martin Reformed Church.

Many people who had the privilege to know Frank Schram could attest that he was a man of few words. Instead he was a “doer.” He was determined, faithful, hardworking, and always ready to serve.

2 Timothy 4:7 “I have fought a good fight. I have finished my course. I have kept the faith. Henceforth, there has been laid out for me a crown of righteousness.”

In lieu of flowers, donations can be made to Faith Hospice or the Martin Reformed Church library.

To send a message of sympathy to the family, sign Frank’s online guest book, or to share a favorite memory, please visit:  www.MichiganCremation.com