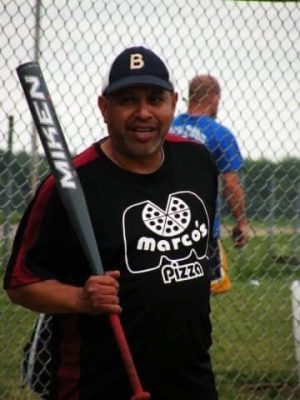 Edward Sam Salazar of Lake Odessa surprised us all by driving in his final home run on Tuesday, December 15th, 2020 after an unexpected illness.

Edward (Ed) was born in Ionia, Michigan on March 30, 1964 the son of Juan and Norma (Vela) Salazar and grew up in Lake Odessa with his brother Roger.  He graduated from Lakewood High School in 1982 where he excelled in baseball, basketball and cross country.  He participated in Vagabonds and was well known for singing the national anthem at Lakewood’s sporting events.

He was known as; Dad, Papa, Big Word, Coach, Uncle Eddie and Ten’er, by those who loved him. He was a go with the flow kind of man who enjoyed the simple things in life such as singing along to a great song on the radio, cruising country roads and playing newspaper trivia with his family. Ed shared a birthday with his only son Eddie who considers it one of the greatest gifts from his father.  He was a great dad and father figure to several nieces and nephews who valued their Uncle Eddie’s unconditional love.

Ed treasured watching his children play sports and cheering them on from the stands.  When the grandkids came along, they quickly became the apples of his eye.  His grandchildren will remember their Papa’s bigger than life hugs, ear to ear smile and receiving a dollar every time he stopped by.

The family would like you to remember Ed as a great man aware of his own flaws and his ability to overlook the flaws of others with unconditional love and acceptance. Throughout Ed’s many years of coaching, Lakewood athletes, he was able to share his passion both on and off the court. His children consider it an honor to have shared this special man’s love with others.

In lieu of flowers donations can be made to the Ed Salazar memorial fund at MSUFCU for his grandchildren.

The family will hold a celebration of life for Ed when we can freely gather to share amazing memories, unforgettable hugs and the impact Ed left on our lives.

To send a message of sympathy to the family, sign Ed’s online guest book, or to share a favorite memory, please visit: