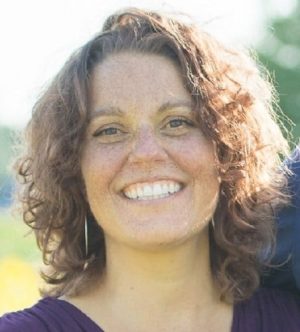 Dr. Chelsea Boet died wearing her “Nevertheless she persisted” t-shirt. It was emblematic of her life, especially in the past few years. She passed away at her Grandville home on Saturday, Nov. 14, 2020, 32 months after she was diagnosed with colon cancer. She was 37 years old.

Chelsea was born in Kalamazoo on Oct. 29, 1983, to Ron and Marcia Cunliffe. She was the oldest of four children, and attended Kalamazoo Public Schools, graduating in 2002 from Kalamazoo Central High School and the Kalamazoo Area Math and Science Center. She was a Heyl Scholar at Kalamazoo College, graduating in 2006, and went onto Wayne State Medical School. She did her medical residency in Grand Rapids, training as an internist and pediatrician. For the past six years, she worked at Spectrum Health’s Grandville office as a primary-care physician.

In September 2013, Chelsea married Peter Boet, the love of her life, and the two settled in Grandville. Their daughter Lillian was born in February 2015 and their son Oliver was born in January 2018. Two months after Oliver was born – and the same week an online survey named her as one of the 10 best family doctors in the Grand Rapids area – Chelsea was diagnosed with advanced colon cancer that had spread to the liver. Although her prognosis was dire, Chelsea and her medical team did everything they could to prolong her life. Chelsea returned to work part time and spent the past two and a half years creating as many memories as possible with her husband, children and extended family and friends. She was thrilled to experience the birth of her first nephew a year ago and to be present at the wedding of her sister, Cara, this past summer. Last January, just before the coronavirus pandemic hit the United States, Chelsea, Peter and their children went to Disney World with Chelsea’s parents, siblings and in-laws. Chelsea joked that it was a self-funded “Make a Wish” vacation. Also after her diagnosis, Chelsea became an outspoken advocate for colon cancer patients and research, joining the board of Paltown, a national advocacy group. For the past two years, Chelsea organized a 5K fun run/walk in Grand Rapids that raised tens of thousands of dollars for the organization. Chelsea was known among her friends and family for her razor-sharp intelligence, her wicked sense of humor, her fierce devotion to Peter and their children, her skills as a doctor and her beautiful smile. She delighted in being a strong, determined woman in an extended family of strong women. Although she lived in a politically conservative, strongly religious part of Michigan, she was an outspoken liberal who was especially passionate about women’s and children’s rights. She also was outspoken about her atheism, and even wrote about that on the blog that documented her experience with cancer. Through Kalamazoo College and Wayne State med school, she had friends around the world. Those friends – as well as her large, extended family – cheered on Chelsea, especially in the past few years. Chelsea’s illness brought her even closer to her parents and siblings, and she often expressed her gratitude for having “the very, very best family.” While Chelsea was heartbroken at the prospect of leaving her children, she was comforted to know she was leaving them with an excellent father and a big circle of loving grandparents, aunts and uncles. Chelsea lived life to the fullest up to her last days. In the last weeks of her life, she hosted a family Halloween event for her children, went on a hot-air balloon ride, celebrated her last birthday and toasted the election of Joe Biden. Her family is devastated by her death and the hole that it leaves. She will never be forgotten.

Chelsea is survived by her husband Peter; their children, Lillian, 5, and Oliver, 2; her parents, Ronald and Marcia Cunliffe of Kalamazoo; her siblings and their spouses, Shane and Katie Cunliffe of Caledonia, Cara and Trent Herman of Kalamazoo, and Cailey Cunliffe of Chicago; her nephew, Walker Cunliffe; her grandparents, Larry and Rosie Mack and Ron Cunliffe, all of Jackson; and numerous aunts, uncles and cousins. Survivors also include her in-laws: Peter’s parents, Jack and Valerie Boet of Grand Haven, and Peter’s brother and his family, John and Erin Boet of Hong Kong and their children, Beatrice and Millie.

Memorial donations can be made to the children’s college fund at Ugift529.com or Paltown at https://paltown.org/donate1/. The code for Lillian Boet’s college fund is 554-M8M and for Oliver Boet, code 44H-F8Q.

A memorial service will be held at a later date.

To send a message of sympathy to the family, sign Chelsea’s online guest book, or to share a favorite memory, please visit: www.MichiganCremation.com