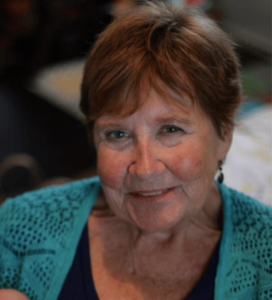 Barbara Jean Ross of Grand Rapids Michigan passed away at home on June 8, 2022. Her

Spectrum Health Hospice. Barbara was born on July 30, 1941. The daughter of Dick and Marie

Devereaux, she lived most of her early years in St. Johns, MI before marrying Dennis Ross and

moving to Ontonagon in the upper peninsula of Michigan. Though she was hundreds of miles

and a world away from everything she had known, she quickly began to forge lifelong

friendships, as was her way. In the ‘70s, the family moved to Kingsford, MI, where she realized

an important goal of hers, earning a high school diploma. In the mid-1980s, Barb, her husband,

and her youngest son moved to Jackson Michigan.

Barb had a rich and varied work life. Among those that were most rewarding to her were her

with Kelly Fuels of Jackson. For her, it was the people that she enjoyed the most and believed

enriched her life. Not surprisingly, she continued to volunteer her time and talents long after

retirement, first at the Michigan Theatre in Jackson and, second, serving as a docent at Meijer

making her a favorite of her grandchildren. Family and friends were very important to her.

Barbara lived with her son Craig Ross. He and his brothers, Jeff and John Ross, combined

efforts to allow her to stay at home when her health began to fail. She is survived by her sons

A graveside memorial service will be held for Barbara at Mt. Rest, 600 N Bus 127, St Johns at

To send a message of sympathy to the family, sign Barbara’s online guest book, or to share a favorite memory, please visit: www.MichiganCremation.com.