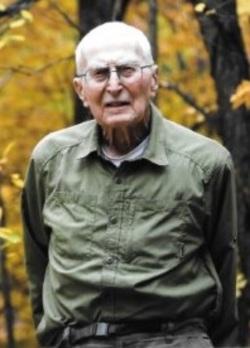 William R. Callow, aged 92, passed away on Sunday, September 13, 2015 in Grand Rapids. The son of William & Maude (VanDusen) Callow, he was born on April 23, 1923 in Detroit. He graduated from Detroit Redford High School and Wayne State University. William served in the US Army Air Corps from 1943-1946; from there he was employed as an engineer at Ford Motor Co. for 34 years. William married Rita Moran in the fall of 1949 and they were happily married for 57 years until her passing in 2006. Surviving are his four children: Thomas (Heather), Richard, Donald (Mary Beth) and Nora; five grandchildren, Emily, Paisley, Amanda, William and Maya; three great-grandchildren, Grace, Shane and Sophia; and brother, James (Laura), of Livonia. Beloved by his family and friends, he will be sorely missed. Donations in memory of William Callow may be made to the Land Conservancy of West Michigan, 400 Ann St, Suite 102, Grand Rapids, MI 49504. A memorial service is not being planned at this time.Honoring his wishes, cremation will take place. Arrangements are entrusted to Michigan Cremation & Funeral Care, Grand Rapids.