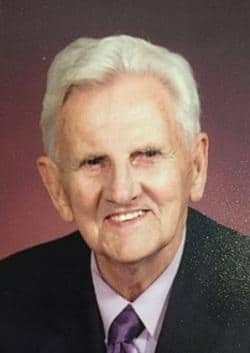 William R. “Bill” Blankenstein, age 89, of Grand Rapids, passed into the arms of his Lord and Savior on Sunday, October 16, 2016 at his home in Grand Rapids. (Sentinel Point). The son of Adrian & Henrietta (Mulder) Blankenstein, he was born on April 29, 1927 in Harvey, IL.

Bill loved cars and spent his early career managing car dealerships in Grand Rapids, Indianapolis, and Fort Wayne. In 1976, he settled in Battle Creek where he managed Browning Buick for nine years. He enjoyed his last 15 years before retirement owning/operating Blankentstein Pointiac Olds in Hastings.

He is survived by his wife of 39 years, the love of his life, Joan Blankenstein; children, Barbara (Jay) Groendyke, Beverly VanderVeen, Susan Blankenstein, and Marjorie (Randy) Garber; step-daughter, Susan (Jeff) Gibbons; half sisters, Laura VanEerden and Marilyn Hillebrands; six grandchildren and several great grandchildren. Bill was a special friend and confidant to his son-in-law, Jay, and they enjoyed years of special times together. He is preceded in passing by his parents; and sister, Jane Kooienga.

Honoring his wishes cremation will take place. A memorial service will be held at a later date. Arrangements are entrusted to Michigan Cremation & Funeral Care, Grand Rapids.