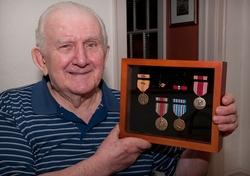 The son of William & Mary Panich, he was born on September 19, 1924 in Detroit and raised. Most recently resided at Crossroads Village in Kalamazoo, and at the Grand Rapids Home for Veterans. He was a proud WWII Army veteran. Perhaps his greatest achievement was his devotion to his wife of 50 years and as her unwaivering caregiver through a long illness.

Bill is preceded in death by his wife, Milly; four brothers; and two sisters.  He is survived by his sons, Will (Lisa) Panich of Kalamazoo and Thomas (Candace) of Vancouver, WA; and grandson, Sean Panich, of Lansing.