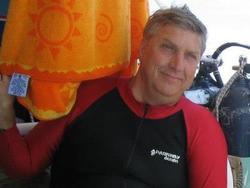 Wayne Irwin Ohm once wrote that upon his birth, December 31st, he irritated the first of many doctors. That doctor was hoping to deliver the first New Year’s baby of 1943. However, Wayne, always one to
follow his own path, decided to come out just moments before the stroke of midnight. And thus, every New Year’s Eve party became a celebration of Wayne.

He worked for years installing and repairing dental equipment. He was very adept at plumbing and electrical work, and was always happy to share with anyone the “right way” to fix things. His list of projects was endless, but he never hesitated to help friends or family with projects of their own.

In 1967, Wayne, along with Mike Pennell, James Hazewinkel, and Irving Thorstein, founded the Grand Valley Scuba Divers. He was a long time president and proud member of the club for over 40 years. The self professed “God of Scuba” taught scuba for many years. He may have been tough and even scary at times, but he made sure you knew your stuff.

Wayne traveled around the world with his family and friends on scuba trips and vacations. He loved exploring and would spend years anxiously awaiting his next adventure. Even in his last months, he spoke often about making a trip to Hawaii and California to visit his children.

With many projects to complete and trips still to plan, Wayne passed away on April 5, 2013. Now he is now reunited with his mother, Annette Vriesenga, brothers, Dave and Terry, sisters, Betty and Paula, and dear friends Bill Johnson and Henry “Hank” Maas.

Wayne will be missed by his children Dan, Carrie, and Matt Ohm and their spouses, Sarah, Ron, and Melissa, his grandchildren Ian & Megan, Spencer & Westley, AnnaMarie & William, his nephews Jeff & Darin Ohm, sister-in-law Carole Venema, his long time Thursday night coffee buddies, and so many friends, neighbors, dentists, and divers.

His children are planning to honor his memory and celebrate his life on August 11 at Half Moon Lake; where he spent time as a child, taught many to scuba, and is a place he held close to his heart. All are welcome.