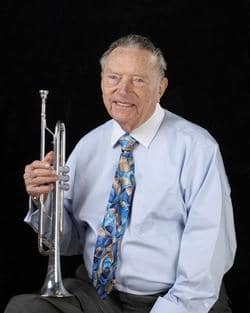 This week America lost another of her sons from the greatest generation when Wayne H. Buttermore, age 88, of Grand Rapids, passed away on Monday, December 16, 2013 at Spectrum Health-Butterworth Hospital. The son of Alma & Cecile (Barr) Buttermore, he was born on May 11, 1925 in Grand Rapids and left high school before his graduation to enlist in the U.S. Army. He was a proud veteran of World War II, having served in England and France. A lifelong musician, he was a quiet, kind, and humble man that loved to play his coronet, especially with the West Michigan New Horizons Concert Band and the Ransom Street Band. For over 25 years he also owned Wayne’s Barbershop on West Fulton and in addition enjoyed bowling and shooting pool. He was preceded in death by his parents; his wife, Phyllis Ruth (Kragt) Buttermore; a son Jay Buttermore, AKA Jason Moore; a daughter, Linda Buttermore; and a brother, Carl Buttermore. He will be missed by his children, Wayne A. (Michele) Buttermore of Northbrook, IL. Lynn A. (Dave) Urban Johnston of Arizona, Dennis C. (Lorraine) Buttermore of Rockford, Craig A. (Connie Solis) Buttermore, and Dirk A. (Roxanne) Buttermore, all of Grand Rapids; eight grandchildren; and twelve great grandchildren. Visitation with the family is from 11 a.m. to 12 p.m. on January 4, 2014 at Faith United Methodist Church, 2600 7th St. N.W., Grand Rapids, where memorial services will follow at 12 noon. Memorial contributions may be made to Faith United Methodist Church, or the West Michigan New Horizons Concert Band. To send a message of sympathy to the family, sign Wayne’s online guest book, or to share a favorite memory, please visit: www.MichiganCremation.com