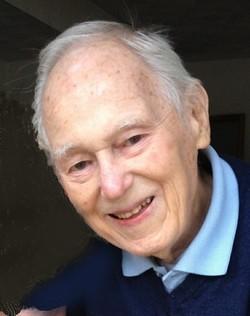 Walter Fries, age 100, of Grand Ledge who passed away peacefully in his home on January 6, 2019.  He was born September 21, 1918 in NYC, to the late Adolf & Gertrude (Kirschner) Fries.
Walter proudly served in the U.S. Merchant Marines during WWII after completing his engagement with Douglas Aircraft as a mechanic in Project 19, a top-secret repair base established in 1941 by President Roosevelt to support the Royal Air Force.

He returned to NYC in 1945, where he met his sweetheart, Grete at a German dance. They married in 1948.
Walter was a dedicated employee of the Oldsmobile division of General Motors, beginning his career in 1950 and retiring as a Service Manager in 1984.

Walt devoted his life to his wife and children, supporting them in their many endeavors. He and Grete shared a life-long interest in dancing and he continually expressed his love and gratitude to his wife who stood by his side to the end. He was a kind-hearted and intelligent man with a love of nature and adventure. He traveled the world, and continued adventuring with family vacations which often consisted of cross country camping trips, where he improvised funny stories & instigated spontaneous sing-alongs to pass the time.

Walter had many talents and interests including poetry, painting, drawing, wood carving, dancing, singing & showmanship. He played harmonica & trumpet and passed his creative spirit on to his children. He was a loving and dedicated father who taught his children to laugh. He had an inclusive nature that drew people in and highlighted their best qualities. He was well known by young and old for his flying origami cranes which he handed out lovingly. Walter loved his fellow man and was a humble soul who touched many with his love and laughter and jokes.  He will be dearly missed.

In lieu of flowers, donations may be made in Walter’s name to the Lansing Liederkranz Club online or by mail:  5828 S Pennsylvania Ave, Lansing, MI 48911 or the Good Shepherd Lutheran Church: 7000 W Saginaw Hwy, Lansing, MI 48917.

Many thanks to Bill, Erica & Michelle at Sparrow Home Hospice for their kind attention.

Honoring his wishes, cremation has taken place. To send a message of sympathy to the family, sign Walter’s online guestbook or to share a favorite memory, please visit: www.MichiganCremation.com