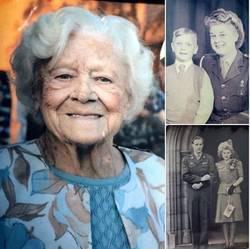 Some of her fondest memories were of the years she spent in the British army during WWII, and she always enjoyed sharing those. On December 2, 1941, just 20 days before her 18th birthday, she volunteered to serve as an anti-aircraft gunner for the British Auxiliary Territorial Service, and was stationed along the east coast of Great Britain. In addition to manning the anti-aircraft guns, Violet was trained to work in radar, radio detection and ranging. This is where she met the love of her life, George, who was stationed in the US Army Air Corps. They married in 1945, and settled in Lansing, Michigan. In addition to raising four children, she worked in the maternity ward at Mason General Hospital (Sparrow Hospital) for 30 years. If you were born in Mason in the 1960s and 70s, chances are you received your first spanking from Vi.

Vi loved traveling and made several trips back and forth to her family in England that many times included excursions to other nearby countries “on the continent.” But her favorite spot to vacation was always Las Vegas. She was also very skilled in knitting and ceramics, and many people were lucky gift recipients of her talents in both. Vi loved baking… her apple pie and English sausage rolls will be greatly missed. And she thoroughly enjoyed attending meetings and events with her friends in the Mason Senior Citizens Club and Kiwanis Golden K.

Along with her mum and dad, Vi was preceded in death by her beloved husband, George in 1988, brothers Fred and Reg, and sister Lily.

Left to cherish her memory are daughters Joie Burns and Sandi (Jeff) Carter, and sons Glenn (Sally) and John (Karen), as well as four granddaughters (Jeni, Shawn, Stacie and Sydney), four great-granddaughters (Cassidy, Jayde, Rylee and Harper) and one great-grandson (Graylenn) all of whom she loved more than anything and enjoyed spoiling. Vi is also survived by one sister, Betty.

For those wishing to offer their condolences, an Interment of the Ashes service will be held at a future date at St. Augustine of Canterbury Episcopal Church in Mason, where Violet and George were faithful members. In lieu of flowers, memorial contributions may be made to:

Heartland Hospice of Mason
or
St. Augustine of Canterbury Episcopal Church of Mason.

The family would like to express their extreme appreciation to the Heartland Home Care and Hospice in Mason for the comfort and care they provided.

To send a message of sympathy to the family, sign Vi’s online guest book, or to share a favorite memory, please visit: www.MichiganCremation.com