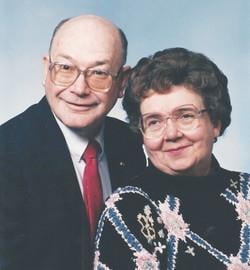 Van O. Keeler, aged 85, formerly of Otsego, MI, peacefully passed away on Friday, July 25, 2014. The son of Lloyd & Bertha (Kikendall) Keeler, he was born October 25th, 1928 in Hamlin Township, Eaton County, Michigan.
After graduating from Highland Park High School, he served in the U.S. Army in Japan. In 1952, he married high school sweetheart, Aino Raty. In 1955, he completed Wayne State University’s Medical School. Following internship in Lansing and residency in Lafayette, LA, he opened his medical practice in Otsego in August 1957, where he worked for 24 years. He became a specialist in Family Practice, and mentored many students. Dr. Keeler was a Fellow in the American Academy of Family Physicians, from 1961. From 1980 to 1988, he was the associate director of the Family Practice residency program at MSU’s Kalamazoo Center for Medical Studies. He then joined Allegan Medical Center until retirement in 1994. In 1988, he achieved subspecialty certification in geriatrics. He served on the Otsego Board of Education from 1959-1978.
After retirement, Van was a locum tenens physician in many states, including Alaska. He fulfilled a boyhood dream as ship’s physician aboard the World Discoverer, an expedition cruise ship that took him and Aino throughout the Pacific, including the Aleutians, Siberia, French Polynesia, The Cook and Easter Islands, South America, and Antarctica. They traveled to every continent except Africa. In addition to his lifelong study of medicine and compassion for people, Van was also a technology, photography and wildlife buff.
Van is survived by 4 children, 10 grandchildren, two brothers; Charles Keeler of Springport and Robert (Erlene) Keeler of Jackson, sister-in-law Emogene (Ronald) Keeler of Hickory Corners, and many nieces and nephews. He is preceded in death by his wife Aino, his parents, sister Carrie, and 6 brothers; Arthur, Roy, Lewis, Forrest, Howard, and Ronald. He will be greatly missed by his family and friends.
Honoring his request, cremation has taken place. A memorial service will be held Monday, August 18th at 11:00 pm with a luncheon visitation following at Otsego United Methodist Church, 223 E. Allegan St. His final resting place will be at Fort Custer National Cemetery. In lieu of flowers, donations may be made to the Epilepsy Foundation or the charity of your choice.