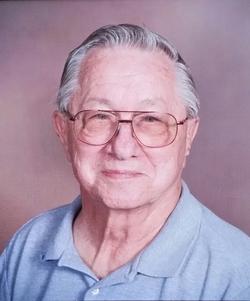 Tom started in the Naval Reserves in 1949 and graduated from Battle Creek Central High School with the class of 1951.  After graduation he worked at Grand Trunk Rail Road.  He enlisted into the United States Navy in 1951 and spent 4 years as a Sea Bees electrician in the Pacific Islands of The Philippines and China. He returned to Battle Creek and worked as an electrician for Grand Trunk, ATT Long Lines in Kalamazoo, the VA Medical Center in Battle Creek, SAC in Fort Custer, and Post Cereals.

Tom reenlisted in the U.S. Navy serving in Cuba, Gitmo Bay from 1960 through 1962 and then remained in the reserves for many years, which gave him a total of twenty four and a half years of service.  Tom returned to Post Cereals until 1973.  He moved to Colorado to work at the Fort Lyons VA Medical Center until returning once again to Battle Creek in 1978 where he went to work for the Air Force at the Battle Creek Federal Center until his retirement in 1992.  After retirement Tom worked at Lowe’s in the electrical department from 1996 until 2002.

Tom gave many hours and years volunteering and serving his country and fellow veterans at the VA with bingo, trips to the Binder Park Zoo, holiday dinner gatherings, and much more. He has a total of 7500 hours at the VA alone.  Tom was also a man of God, he attended Westlake Presbyterian Church.  In Tom’s free time he enjoyed classic cars, antiquing and traveling but most of all he enjoyed people, spending many hours over the years at Bob Evans and Lux restaurants for meals and getting to know the staff as if they were family. There were very few places you could go that he didn’t know someone by name.

He was preceded in death by his wife, Mary; daughter, Tamarah; son, Christopher; his parents; brothers, Ronnie and Fred; and sister, Patricia Ann.

In lieu of flowers donations in memory of Thomas can be made to the Battle Creek VA Medical Center Community and Volunteer Service (135), 5500 Armstrong Road, Battle Creek, MI 49015 or to the Bronson Battle Creek Hospital, BBC Volunteer Fund, 300 North Avenue, Battle Creek MI 49017 or online at www.bronsonhealth.com

The family would also like to send an enormous “THANK YOU” to the staff at the Battle Creek VA for their caring, helping hands, and loving hearts.  You are wonderful!

To send a message of sympathy to the family, sign Tom’s online guest book, or to share a favorite memory, please visit: www.MichiganCremation.com