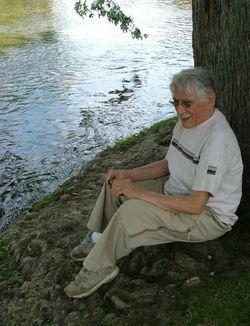 He was preceded in death by his parents, Leroy and Phyllis; siblings, James, Barbara, and Donald.

Thomas is survived by his wife, June Wenger; son, John (Jill) Wenger; daughters, Betsi Wenger, and Janet Wenger (Larry Johansen) as well as his sons, Matt and Mark Musial. He will be missed by his grand children, Joshua, Jerry, Corrina, Heather, Natalie, Sally, Ian, Bronwyn, Brice, Aidan, Eleri, Evan; two great grandchildren, Grayson, and Emmy; and all the Byron Street neighborhood children who called him Grandpa Tom.
Tom taught for many years at Grand Rapids Public Schools and was a leader in programs for adult education. He was very active in his neighborhood and will be missed by many. We will be having a memorial at his home when his flowers are blooming.

Honoring his wishes cremation will take place. To send a message of sympathy to the family, sign Thomas’ online guest book, or to share a favorite memory, please visit: www.MichiganCremation.com
Arrangements are entrusted to Michigan Cremation & Funeral Care, Grand Rapids.