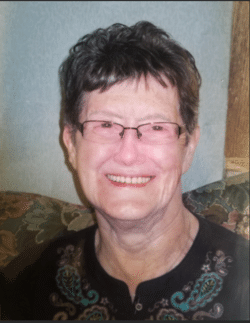 Share
Tweet
Share
Thelma E. (Bryant) Jackson passed away on, Sunday, May 26th at Edison Heights Christian Home in Grand Rapids after battling Alzheimer’s Disease for nine years.
Thelma was born on September 1st, 1939 in Middlesboro, Kentucky. She was the daughter of Charles and Lottie Sutton. The family moved to Battle Creek in 1957 shortly after her high school graduation. She was working at a dry cleaner on Cliff Street when she met her late husband, Jim Bryant, in 1959 they were married on June 24, 1961 and later divorced. She then married Otto Jackson on October 15, 1995.
Thelma retired from Transamerica Insurance in 1999 after many years of service. She was a member of the Andrus Street Church of God and played the piano there since 1957. She was also a longtime member of the church trio, The Joybells.  Serving God and the church was everything to her. Simply put, it was the most important part of her life. She was delighted to share her love of the Lord with everyone she met. She was also an accomplished, self-taught, pianist. Thelma learned by practicing on a cardboard box as a child and even after playing the piano for almost six decades, was still unable to read music. Her ability to play music and transpose any song was a true gift from God. It was through her singing and piano playing that she blessed the masses over the years and was able to lead many people to the Lord.
Thelma is survived by her daughter, Sheila & Phil Horrell of Battle Creek; son, Scott & Deanna Bryant of Union City; sister, Dorothy & Bernie Hewitt of Grand Rapids; grandchildren, Justin & Heather Loser, Nichole Collins, Seth Bryant, and Andrew Bryant; great-grandchildren, Celeste, Samantha, Nathan, Israel, Kinley, S’maree, and David. Thelma was preceded in death by her parents, Charles and Lottie Sutton; brothers, Charles Ray Sutton, and Luther Berkley; and grandson, B.J. Loser.
The family would like to welcome everyone to a Memorial Service.  Visitation will be Saturday, June 1, 2019 from 12:00 – 2:00 P.M., with the memorial service starting at 2:00 P.M., at The Church of God, 765 Andrus Street in Battle Creek, 49015. Flowers may be delivered to the church.
To send a message of sympathy to the family, sign Thelma’s online guestbook or share a favorite memory, please visit:  www.MichiganCremation.com Arrangements are entrusted to Michigan Cremation and Funeral Care, Grand Rapids.