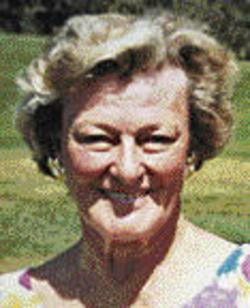 Sylvia Helen Schuman-Poch of Grand Rapids passed away Friday, September 21, 2012. She is preceded in death by her children, Kenneth Schuman and Margery Schuman-Rodriguez, her first husband Kenneth Schuman, her second husband Russell Poch and grandson Jordan Rodriguez. She is survived by her loving son Jim Schuman, daughter-in-law Carrie Goldner, and granddaughter Jennifer Rodriguez. She will be missed by her sewing group and great friends whose lives she touched. Sylvia was born and grew up in South Africa where she was a Lieutenant in the South African Women’s Army Corps. She moved to Grand Rapids in 1947. She was introduced to golf by her mother-in-law and became an avid golfer. She joined the Grand Rapids Women’s Metropolitan Golf League in 1952 where she was a chairman and secretary, playing till 2008. There will be a memorial service at Graceland mausoleum on Cascade Rd, Thursday, September 27, 2012 at 1pm. In lieu of flowers the family asks donations be made to Fountain View Retirement Village of Grant MI. Arrangements are entrusted to Michigan Cremation & Funeral Care, Grand Rapids.