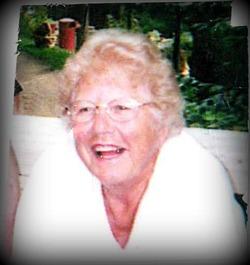 Pat Scholl died peacefully at home on September 17, 2016 at the age of 90 1/2. She was born on March 17, 1926 in Riverside, Illinois to Albert F. Drazil and Mildred Catherine Heckel Drazil. She studied to be an airline stewardess for United States Airlines but opted for marriage instead when she met her beloved Bennett L. Scholl at Rothbury’s Jack and Jill Dude Ranch (for singles!) in 1946.

Ben and Pat became partners in the well-known Scholl Auction Service after Ben graduated in December 1948 from the Reppert School of Auctioneering. Ben, who died in 2013, was the face and distinct voice, while Pat filled all the other equally important roles from clerk to publicist. Both hard-working and strong willed, Pat and Ben raised three children, daughters Sherry and Becky and son Stuart, plus hundreds of animals; including spectacular draft and quarter horses.

They also organized 22 annual Plow Days at their farm, which grew to be one of the largest events of its kind in the country. Pat enjoyed tennis, swimming, collecting antiques, and playing the piano. In the 1980’s and 90’s, she paired her entrepreneurial skills with her love of travel and founded Scholl County Travel with her daughter, Sherry.

Pat is missed by her sister Elsa Gauler; her children; grandchildren, Dulcey, Dean, Tristan, and Linsey, three great-grandchildren; two great-great grandchildren; and a multitude of other relatives and special friends. The Scholl Farm on Eilers Road serves as a living memorial to Pat and Ben’s tenacious passion for farm life and their commitment to the community they loved. In accordance with Pat’s final wishes, no public memorial service will take place.