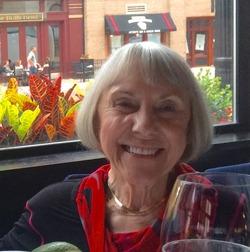 Sherry Redding (aka Joyce Karosi) of Ada died at home surrounded by her family on June 14, 2016.

She is survived by her partner and spouse of 36 years Karen Clahassey.  In addition to Karen she leaves her daughter Sandra Karosi and her spouse Deb Gould of Vernon, Connecticut and sister Ruth Redding Brand and husband Robert of Lancaster, Massachusetts.   She also left a cousin Rodney Redding and his wife Judy of Clinton, Maine. She was predeceased by her son Paul Karosi in 2007.

Born on May 22, 1936 to Florence and Aiden Redding of Redding, Maine, Sherry graduated from the University of Michigan and received her Masters from Michigan State.  In addition, she studied at Sancta Sophia Seminary and was ordained by Light of Christ Community Church in 2006.

All her life Sherry was passionate about reading and women’s rights and usually the two were inextricably linked.  She taught literature and women’s studies for several years at William James College, a part of Grand Valley State Colleges. While at William James she became one of the founding members of the Women’s Studies program and subsequently a founding member of Aradia, a nonprofit women’s organization in Grand Rapids.   After Williams James closed she continued her private counseling practice from which she retired in 2012.

Sherry loved poetry, literature, a good debate and red wine – in no particular order.  She volunteered tirelessly for progressive political candidates and could occasionally be found with a picket sign in her hands protesting environmental and political causes she was passionate about.

Sherry was a good friend and was loved by all who knew her. She had a deep understanding of people and in her presence, everyone felt honored and seen.  Sherry was charming, witty, kind and gracious and had an immaculate sense of style. She wasn’t afraid to speak the truth and did so with conviction.

A celebration of her life will begin at 1:00pm on Wednesday, June 22 at Watermark Country Club, 5500 Cascade Road SE, Grand Rapids.

In lieu of flowers, contributions may be made to the Malala Fund, a non-profit organization for girls’ education or The Nature Conservancy of MI.