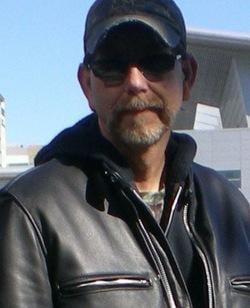 Scott D. Guthrie, age 54, of Wyoming, passed away on Friday, November 13, 2015 at home surrounded by family. The son of Owen & Betty (Sharp) Guthrie he was born on March 21, 1961 in Grand Rapids. Scott retired from General Motors after 30 years of being a computer operator. He had many hobbies and interests, from hunting, playing his guitar, to working on and riding his Harley Davison… and was a proud Michigan football fan. Most importantly he had a passion for people and lent a helping hand wherever he could.

He was preceded in death by his parents. Surviving are his loving wife of 32 years, Sherie Guthrie; two children, Shellie Guthrie, and Matthew Guthrie and his fiancé Kayla Vanwyck; grandchildren, Leona, Hailey, Brody, and Lilly; siblings, Rick Brunke, Sue (Lyle) Shanks, Pat Daniels, and Robin (Joe) Barnes; many nieces and nephews; good friend, Tom Stellema; best friend and buddy, Steve Pleva; along with many other great friends; and pets, Bella his dog, and Lucky Rose, the turtle he saved and cherished.

Memorial services are from 3 – 6 p.m. on Friday, November 20, 2015 at Michigan Cremation & Funeral Care, 3627 Linden Ave. S.E. at 36th Street, Grand Rapids, (one block west of Eastern Avenue). The family would like to thank everyone at Faith Hospice and in honor of Scott asks that contributions in his memory be given to Faith Hospice (www.FaithHospiceCare.org)