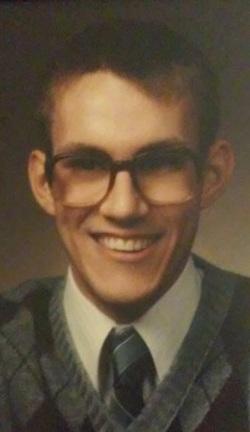 Scott D. Donahue, age 49, of Grand Rapids, and formerly of Ada, passed away on Wednesday, January 11, 2017 after a lifetime struggle with a progressive neurological disease. Scott is finally at peace in the loving arms of our Heavenly Father. His loving parents and sister thank God for the blessing of having such a special son and brother.

Scott is preceded in death by his grandparents: Earl and Cora Donahue, and Harold and Luella Kransi, and his uncles US Marine Ronald T. Kransi (Vietnam Veteran) and Dale Semon.

He is survived by his parents Dan and Karen Donahue, his sister Debbie Donahue and her husband Scott Przekop and her step-son Austin Przekop-Abel. He is also survived by his uncles and aunts: Harold (Sandy) Kransi (FL), Roger (Debby) Kransi (TN), Owen and Kaye Wright (MI) and Mary Semon (MI) and many cousins.

Scott was proud to be a graduate of the Ottawa High School POHI Center. A private service was held by his immediate family. Donations may be sent to God’s Kitchen, 303 Division Ave., S, Grand Rapids, MI 49503, or online to ccwestmi.org, or to a charity of your choice. Arrangements are entrusted to Michigan Cremation & Funeral Care, Grand Rapids.