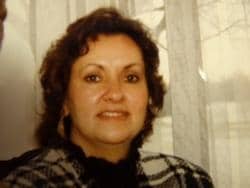 The journey of Rosemary Williams ended, from a tragic accident, on Tuesday, September 22, 2015. Rosie began her journey on December 10, 1946 in Grand Rapids, where she was born to William & Dale (Bean) Farsley. She was a graduate of Central High School and attended Davenport College both in Grand Rapids. Her years in the workforce found her at many office jobs and restaurant hostess positions.
Rosie’s journey took her and, the love of her life, Jim Williams to the Florida Keys where they “LIVED” for thirteen years. Rosie was always soaking up the sun, the sun and more sun with her children and best friend late Katie Rich. Rosie’s favorite things were family, sunshine and her music. She always wore her heart on her sleeve and showed an outpouring of compassion to everyone and everything. It was compassion that brought Rosie and Jim back to Grand Rapids, in 1988 to take care of her ailing mother and stepfather.
Surviving are her loving husband of 39 years, Jim Williams; three beautiful children whom she cherished and loved very much, Todd (Lisa) Ackerman of Baltimore, MD., Michelle (Todd) Morris of Rockford, and A.J. (Hollie) Williams of Grand Rapids; two very caring step daughters, Carrianne Williams of Boca Raton, FL. and Jodi Williams of Maggi Valley, NC.; two brothers, William Farsley of Cape Coral, FL. and Anthony Farsley of Phoenix, AZ.; Rosie received much happiness from her grandchildren, Caitlin, Cori, Keegan, Olive, Emilio, Christian and Abba who liked to call her Gibby; along with a host of other loving relatives and good friends.
Preceding Rosie in death were her parents, Dale and L.V. White and William and Rosemary Farsley all of Grand Rapids. In laws, James and Eleanor Williams of Toledo, Oh.
Rosie’s journey has taken many twists and turns over the years but she always remained true to her principals and beliefs. “There aren’t a lot of people on earth who have the ability to treat everyone they meet genuinely—Rosie did…….she was the “real deal!” She was Jim’s and AJ’s private treasure for those that were not fortunate enough to have crossed her path. Rosie will be greatly missed by those who loved her dearly. In our hearts and minds she will live on forever. A small memorial service will be held in Toledo, Oh. at a later date.