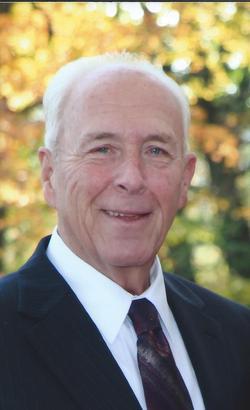 Rollin Gene Coutchie, 87, passed away Wednesday, November 28, 2018 at First & Main Metro Health Village, Wyoming, MI under the wonderful care of Spectrum Health Hospice, with his family at his side.

The son of Napoleon & Laura (Jibson) Coutchie, he was born June 19, 1931 in a home in Fremont. On December 1, 1951, he married the love of his life, former Dolores LaCross. Together they enjoyed 67 blessed years of marriage and raised two children; Bruce and Janet. Rollin grew up in the Muskegon area, which is where he met Dolores when he was 17. Rollin moved to Flint to hire into General Motors in 1949. He was drafted during the Korean War and became a Marine in 1951. After their wedding, they moved to Camp LeJeune, NC. Rollin proudly served as an MP in the Marine Corps for 2 years. Following his service, he returned to work at General Motors and they lived in Flint, before relocating to Flushing in 1970. They faithfully attended St. Robert Catholic Church in Flushing. Rollin worked in the Metal Refinishing Department of Buick City, General Motors in Flint for 41 years.

God gifted Rollin (a.k.a. Rolie) with the ability to fix just about anything. He was very generous with his time and talents and helped many friends and family with several projects in his lifetime. Rolie was a super patient, organized, easy going, and fun loving man. Everyone enjoyed his company. He was very energetic and took pride in anything he owned, old or new his possessions were well cared for and looked like new. One of his favorite past times was spending time with his son working on cars and engines and teaching his talents. After his retirement in 1991, he and his wife spent time traveling all over the country in their motor home; along with spending many of their summers at Sandy Pines in Hopkins and winters in Fort Myers, FL. One of Rolie’s biggest joys was spending quality time with his family, grandchildren and many friends. He was known to have a kind-heart, always having a warm genuine smile, and bright blue twinkling eyes. His face lit up when he smiled or laughed. He had many activities that he enjoyed with his family by his side, including camping with their motor home, boating and water skiing behind his wooden Century Arabian, snowmobiling, motorcycling on the off road trails, working on his play toys with all of his tools in his back garage, playing the accordion and organ by ear, bicycling with the family, listening to music and playing cards and games. Several family and friends always commented on how Rollin and Dolores had an amazing loving relationship that grew stronger over the years. They were best friends, always busy going here and there to visit family and friends. They were great role models for many.

Also he is survived by his sister-in-law, Carol LaCross, and his siblings, Bud Seeger, Carole Howard and Roger Davis. Rollin will be missed by many other nieces, nephews, cousins and friends. Rollin was preceded in death by his parents, his in-laws Charles & Regina (Witkowski) LaCross, and sister Delores June Coutchie.

To send a message of sympathy to the family, sign Rollin’s online guest book, or to share a favorite memory, please visit:  www.MichiganCremation.com