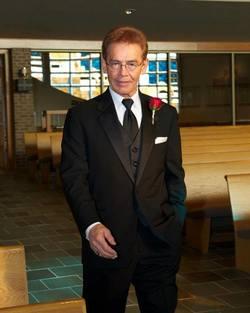 Roger was born in Petoskey, Michigan to Doris (Adams) Clark and Harold Bearup, Sr., on October 2, 1944 and grew up in Fremont.  He was a decorated veteran of Vietnam and worked hard to climb the ranks to serve as a pilot in the United States Navy. Washington State has always had a special place in his heart as he was stationed there throughout his years of service. After his service in the Navy, he was married to Patricia (Calkins) Kushnak and they raised their two sons, Jason and Adam in Montague, Michigan.

He graduated from Muskegon Community College and enjoyed many years as an insurance agent before going onto work at Haworth for 20 years. Upon his retirement, he went on to work with his son Adam’s family business for 9 years.

Roger loved spending time with his family and close friends. He enjoyed his retirement working with his sons, making memories with his granddaughter on the family farm, and Saturday gatherings with his closest friends. Roger was known for his genuine, loyal and kind compassionate heart, and was the essence of his favorite catch phrase, “Peace, Love and Kindness, always.”

Visitation with the family from 10:00-11:00 A.M. before the funeral services followed by burial with military honors will be held at 11:00 A.M., on Wednesday, March 16, 2016 at St. James Catholic Church in Montague. There will be a luncheon followed after the mass and burial.