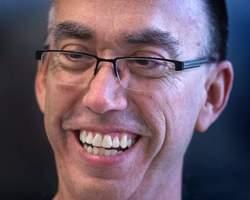 Robert W. “Bob” Chambers II, age 51, of Rockford, entered his eternal home on Sunday, March 20, 2016, surrounded with the love of his family.

The son of Robert Chambers and Anna (Blackwell) Friar, he was born on June 15, 1964 in Indianapolis, IN. Bob attended New Palestine High School, followed by DeVry University, where he received his Bachelor’s degree in Computer Sciences. Bob married Melissa “Lissa” Turner on July 12, 1997 and welcomed his stepson Andrew Turner as family.  In November 1997, Bethany Chambers was born and completed his family. Bob worked for Hekman Furniture Company in Zeeland as an IT Project Manager until his illness made that impossible.  Their support throughout his illness was priceless.

Bob fought a 9-month battle against leukemia (AML) in the same style he handled life: giving 110%.  He was a man of great faith and courage, and he was a tremendous encourager of others, as well as being a fully dedicated father, stepfather, and husband. His interests were his faith, where he attended Bridgeway Community Church, his family, music, sports, and tennis, which he especially enjoyed with his daughter.  Before passing, he was blessed to see Bethany graduate early with honors from high school at a special ceremony in his home. The family will be forever grateful to the Rockford Public Schools for putting together that event in a matter of a few hours.

A Celebration of Life will be held at 2:00 pm on April 17th, 2016 at Bridgeway Community Church, 6175 Northland Drive NE, Rockford. Indiana University Hoosier attire (red/white) encouraged, but not required.

In lieu of flowers, memorial contributions may be made to the B Chambers Education Fund at Independent Bank, 78 Main Street, Rockford.

Some of Bob’s favorite quotes were the following:

“Live so that when your children think of fairness and integrity, they think of you” ~ H. Jackson Brown

“Anyone can find the dirt in someone. Be the one that finds the gold” ~ Proverbs 11:27