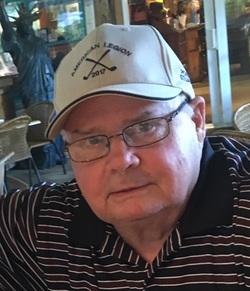 Share
Tweet
Share
Bob “Apple” Applegate, was a guy who always liked to say he did everything in moderation!! He has recently left the building at the age of 70. Apple graduated from Caledonia High School in 1965.  He made all conference in football his Jr. year and was President of the Student Council his Senior year. He attended Central Michigan University in 1969 and earned a masters degree in Education at Western Michigan University in 1971. Apple taught at Kelloggsville High School from 1969 to 1979, coached the golf team, ran the Drivers Education Dept., and was the Chairman of the Business Education Dept. He also taught Bookkeeping, Senior Math and Typing.

Apple officiated High School and small college basketball for 22 years. He officiated football for 15 years, umpired baseball for 24 years, and was President of the West Michigan Umpires for several years.

For the past 35+ years Apple has worked for The Campbell Insurance Group specializing in commercial insurance for the Hospitality Industry. Yup, bars, nightclubs, restaurants etc. His claim to fame was having over 100 clients on the books for over 25 years.  Apple was a member at the Sunnybrook Country Club for over 30 years, made the District Team 2 years in a row, and made numerous Hole In Ones. For the past several years Apple gave up golf because it ceased to be fun. Hyperventilating over a three foot putt got to be too much stress.

Apple was preceded in death by his son, Robert Michael Applegate II, formerly nicknamed “2” who died at the age of 36 in a tragic auto accident.

He is survived by his loving wife Christine of 30 years; his son, Thomas Chad Applegate; daughter, Ashley Applegate; Step-daughter, Mandy Ranger (Cliff); and a bunch of wonderful grandchildren. Apple had a great ride in life. As he would say, “no one gave me shit; I earned it”!!! He was a stand up guy that always paid his fair share. It is what it is….

Yup, written by the Apple.

To send a message of sympathy to the family, or sign Robert’s online guest book, please visit: www.MichiganCremation.com