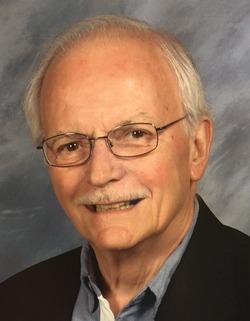 The son of Carl & Celestia (Benson) Horton, he was born in 1927 in Sand Lake. A proud U.S. Army veteran, Bob served in Japan following WWII. Bob was a retired member of clergy in the United Methodist Church. He served pastorates in Boaz, WI, Berrien Springs, Wyoming Park, Detroit, and Utica. He also served for six years as District Superintendent of the Port Huron District, (the Thumb Area) and ten years as the Michigan Area Assistant to the appointment of a Bishop, and his ten Interim Assignments served since then. Bob enjoyed playing golf, traveling, photography, voluntary work at Clark, and relating to people.

A Memorial Service will be held at 11:00 a.m., on Monday, October 24, 2016 at Trinity United Methodist Church, 1100 Lake Dr. S.E. with a visitation one hour prior to the service. In lieu of flowers, memorial contributions may be made to the Clark Benevolent Fund, Grand Rapids, or to the Robert E. Horton Scholarship Fund at Garrett-Evangelical Theological Seminary, Evanston, IL.