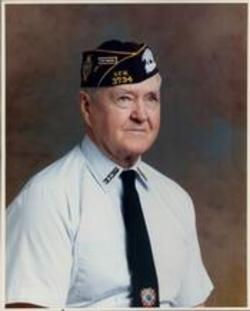 Robert John Brown, 93, of Muskegon, passed away Friday, October 14, 2011 at the Grand Rapids Home for Veterans. The last surviving child of Lila (Simpson) and Harry Brown, he was born on July 6, 1918 in Muskegon.

A veteran of World War II, Bob served in the United States Army at Guadalcanal, assigned to Company B, 873rd Engineer Aviation Battalion, 1st Cavalry Division and was a life-long member of VFW Post (Polar Bear) 3734 in Muskegon, where he had served as post commander.

He and his late wife of 63 years, Rose Ricco Brown, made their home on East Evanston Avenue in Muskegon and Bob retired from the City of Muskegon Highway Department after 30 years of service. A sports enthusiast, he taught many young boys baseball and the merits of scouting.

Surviving are three sons: Robert John (JoAnn) Brown, Jr. of Greensboro, North Carolina, Jack Dennis (Suzanne) Brown of Frankenmuth, and Jeffrey Steven (Lisa) Brown of Bagdad, Arizona. He left a legacy of six grand children and eight great grand children. He was loved and cherished by his family and friends and will be greatly missed.

Funeral Mass will be celebrated at 10:00 a.m. on Tuesday, October 18 at the Grand Rapids Home for Veterans chapel, 3000 Monroe Avenue N.E. Grand Rapids, with viewing one hour prior to Mass. Interment will follow at St. Mary’s Cemetery, Laketon Ave. at Park St., Muskegon.