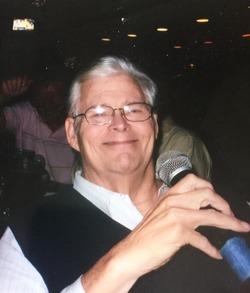 Robert R. Ashworth, Jr., age 68, formerly of Livonia, Michigan and Myrtle Beach, South Carolina, passed away Tuesday, June 7, 2016 at the Grand Rapids Home for Veterans, where Rob had resided the past three years.  The son of Hazel May (Postlethwaite) & Robert Reniger Shaw Ashworth, Sr., he was born on February 17, 1948 in Lansing.

A decorated combat veteran of the Vietnam War, Rob proudly served with the United States Army and was awarded both The Bronze Star and Purple Heart medals.  He went on to earn his bachelor’s degree, co-founded and was president of Search America (an executive recruitment firm), and belonged to several veterans’ service organizations, including the American Legion and the Veterans of Foreign Wars.

While at the Grand Rapids Home for Veterans, he served as president of the Members Council. He was a true leader and acted as the voice of many unheard veterans.  Rob enjoyed golfing, singing karaoke, and was a talented singer and songwriter. If you asked him what his greatest accomplishment was, without hesitation, he’d answer, being a father; nothing made him prouder.

He was preceded in death by his parents.  Surviving are his daughter, Katie Ashworth of West Bloomfield; a sister, Carole Ashworth of Atlanta, Georgia; the love of his life, Susan Streng; and many dear friends.

Committal services, with full military honors, are at 1:00 p.m. on Tuesday, July 26, 2016 at Great Lakes National Cemetery, 4200 Belford Road, Holly. Instead of flowers, Rob would have appreciated contributions in his memory to the Friends of the Michigan Veterans Homes, Inc., P.O. Box 805, Grandville, MI 49468-0805