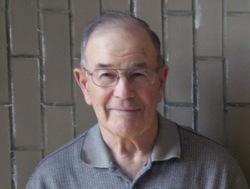 Son of Arthur and Grace (Silberhorn) Weber, he was born on April 20, 1921 in Bainbridge Township. Richard was a proud WWII veteran having served with the 20th Armored Division in the Battle of the Bulge. After the war, he came home and worked as a welder. He operated Weber’s Welding Service and worked for the Whirlpool Corporation. Richard loved golfing and flying; he was a member of the local chapter of Experimental Aircraft Association.

Richard was preceded in death by his loving wife of 68 years, Edith (Kullik); parents; and his brothers, Robert and Norman. Surviving are his daughters, Nancy (Dan) Kella, from Asheville, NC, Pat (late husband Ken) Marrison from Lansing, and Cindy (Stan) Weber-Starnes from Greenville, SC; eight grandchildren; and four great grandchildren.

In lieu of flowers, memorial contributions can be made to Hospice at Home, 4025 Health Park Lane, Saint Joseph.