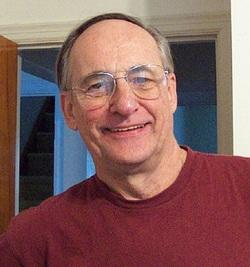 Richard “Dick” Clarence Cimochowicz, age 86, of Wyoming, passed away on June 23, 2017 at home surrounded by his loving family. Richard’s parents were Walter Adelbert and Valerie “Violet” (Niedzwicki) Cimochowicz. Richard, also known to many as Dick, was born in Grand Rapids on April 26, 1931. He graduated from Union High School in 1948. Richard married Edith Darlene Johnson in Grand Rapids on November 27, 1954. Dick and Darlene spent almost sixty-four years together, for better or worse, in sickness and in health. Darlene has Always been Richard’s Earth Angel and now Richard, also known as Dad, is our Angel.

His many wonderful relatives and friends knew him as a compassionate, strong, and loving person that could be relied on to help anyone with anything. He was a genius with unlimited skills and talents, he could fix anything, and we were hopeful that he would fix his cancer too. After ten years we thought he had beat the prostate cancer, later to discover that it had metastasized into his bones. Richard was given a 90 day estimate and through the power of prayer and support he turned that into almost two years. Darlene and his family were by his side making the most of our time together.

Richard always had a boat as he loved boating. He would spend two weeks summer vacation taking the family on the boat and cruising up the Eastern coast of Lake Michigan, from Grand Haven, to Mackinaw and back while we explored the ports. Richard was the Captain of our ship, and protected us as we would sometimes have some rough weather, while Darlene was our anchor, keeping the family surrounded by Light and Love and on an upward path. While half of our family has little desire to be on a boat, we always enjoyed our adventures. Richard loved salmon fishing on Lake Michigan, or our favorite spot on the Platte River. He made his own fishing flies, weights, pole brackets and other inventions before they were available. Richard was a computer whiz almost always sitting with two computers at the same time so he could do other things while one computer was processing. He liked editing photos to make it look like his wife was on a lookout or a bridge, a rarity. He would make his own greeting cards, business cards and spent many hours documenting our family legacy.

Richard also loved taking his family and cats on trips in their RV, circumnavigating Lake Superior, New Brunswick, Canada, and New England. Richard and Darlene spent time in Manistee and Onekama locating Darlene’s families grave sites. Richard and Darlene traveled to Hawaii and California visiting their daughter Diane as she served in the U. S. Navy for almost 23 years. While visiting his daughter Diane in California, Mom and Susan along, they all took a trip up to Sequoia and King’s Canyon, and got to hike up Morrow Rock, and stand with the ginormous redwoods. Richard was dwarfed as he stood next to those giants, but his smile of amazement was that of a child. It was a little known dream of Richard’s to see the Sequoia’s Giant Redwood trees as he also enjoyed building things with wood. A redwood bench and a forty-eight foot long, six-foot high fence still standing. When Richard and Darlene visited Diane in Hawaii, she picked them up in a chauffeured silver Rolls Royce, and they rode around Honolulu, and Waikiki, ending in Manoa valley where Diane was living.

Richard and Diane got Mom into a ten seater plane and they flew over Kilauea, and the nine main islands of Hawaii. They had a great time hiking Lyon’s Arboretum and beaches. Until a few months ago, Richard continued to mow the lawn, shovel snow, as well as taking care of the family vehicles, maintaining heating/ac, working on his ride mower, and changing the oil in the RV, cars and other engines. Everywhere we look, we can see his handiwork. Richard was a loving, honest, consistent, hardworking, stubborn, brilliant, cat-lover, multi-faceted, reliable, quiet, intelligent man that shall shine brightest among the stars.

Richard started as an Electrical Apprentice in the IBEW taking night classes to further studies in electrical engineering and spent almost 10 years with Doelher Jarvis working with Chrome Plating, Painting and Die Casting of zinc automobile parts, and trim company as a Maintenance Foreman. He spent nine years as a Maintenance Foreman at Hekman Bakery during which time PopTarts were created. Richard worked at Nelson’s Metals which was a zinc and aluminum casting company. He returned to Grand Rapids Metalcraft and spearheaded moving 75% of their manufacturing to Tennessee. He spent the last ten years of his career as a Plant Engineer for United Technology Automotive with the last six months the company was sold to Lear Corporation and Richard retired April 1, 2000.

Richard and his wife Darlene volunteered in the U. S. Coast Guard Auxiliary for many years. Richard was elected as Flotilla Commander while Darlene served as Secretary. Richard and Darlene stood many weekend watches, conducted boat inspections, and were involved in several Search & Rescue missions at Muskegon, Grand Haven and South Haven. Richard was a cancer survivor for twelve years. He surpassed every estimate of time he was given by the doctors and never gave up. Richard endured prostate cancer for ten years, then kidney stones, bladder cancer, and atrial fibrillation led to him having heart ablation, because he was in great shape as they usually don’t consider ablation on person over 70 year of age. Richard survived several rounds of radiation and chemotherapy for the prostate cancer when it had metastasized into bone cancer. He never gave up, his body could no longer endure.

The family of Richard Cimochowicz wishes to extend our heartfelt sincere gratitude to everyone that kept us in their prayers and thoughts, they made a big difference! Also, we give thanks for the wonderful blessed crew of professionals of Great Lakes Healthcare; the entire congregation of Faith Reformed Church of Wyoming, and the professionals at Care-LINC.

Family and friends are invited to gather for a Celebration of Richard’s Life at 12:00 p.m., on Friday, June 30, 2017 at Faith Reformed Church, 618 32nd St., Wyoming, 49509, where a visitation will take place one hour prior, and a luncheon to follow the service. The funeral procession will depart at 1:50 p.m. from the church to Resurrection Cemetery, 4100 Clyde Park Ave S.W., Wyoming, 49509, where a Committal Ceremony will be led by Pastor Bruce.

Our family graciously thanks Pastor Bruce Osbeck for his blessings and unconditional support. Darlene has been attending Faith Reformed Church and Pastor Bruce has been welcoming and loving for Darlene. She loves that she can walk to services. Pastor Bruce came by the house many times, as more and more challenges presented themselves, he would talk with Richard and family and shared his insight, blessings and prayer.

A little bit about C-SNIP, it stands for Community-Spay Neuter Initiative Partnership offering affordable services and to date they have spay/neutered almost 150,000 cats and dogs. C-SNIP depends on grants and community donations to keep surgery fees affordable for everyone. While C-SNIP does not require income verification to use our spay/neuter services, we realize that some clients may be able and willing to go the extra step to support our services to low-income families. C-SNIP offers a Paw it Forward price of $105/dogs and $60/cat. This fee includes your pet’s surgery, nail trim, and a donation of $20. The donation is tax-deductible and will help us continue to offer affordable spay/neuter services in our community. Be a part of the solution, ask for the Paw-it-Forward fee when you book your next appointment.

Honoring his wishes cremation will take place. To send a message of sympathy to the family, sign Richard’s online guest book, or to share a favorite memory, please visit: www.MichiganCremation.com