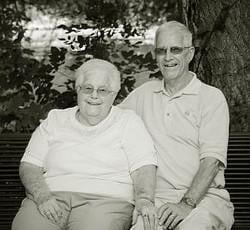 We sadly say good bye to a loving husband, father, brother, uncle and grandpa. Richard, age 85, went home to be with his Lord on Wednesday, July 1 2015. He was preceded in death by his wife Martha, his mother Doris and father Bernell Weirick and twin brother Ron. He is survived by his three children Richard Weirick Jr, (Kalamazoo), Marrilee (Greg) Chamberlain and Brian Weirick (South Carolina); and grandchildren Laurel and Kathryn Chamberlain, Ethan, Maddison and Brianna Weirick and his brother Roger Weirick and Sister Portia Webster.

Richard was a proud Michigan Technological University alumni majoring in Electrical Engineering. He was a key engineer at many local companies including Lear Jet/Lear Siegler, Conductron, E.W. Bliss and American Bumper as well as sole owner for Current Corporation. He holds over 18 patents designing key items on Lear Jets, NASA rockets, manufacturing controls and more. Dick was known for his sense of humor as well as his persistence for excellence in engineering and was instrumental in developing the ANSI B11.1 safety codes for punch presses. An engineering expert witness, Dick was call on to testify in many engineering related legal disputes.

As an Air Force veteran, Dick earned his first ‘wings’ at the age of 15 as an Eagle Air Scout along with his twin brother Ron. While enrolled for a year at Western Michigan University, Dick learned the morse code. Having the ability to pilot aircraft and his understanding of morse code, he was recruited for the Air Force at the start of the Korean War bypassing boot camp completely!

After serving in the Air Force in Roswell, New Mexico, Dick and his wife Martha returned to Michigan to raise their family. As one of the founding family members of Fair Haven Reformed Church, Dick and Martha were strong leaders in their faith and long-time members of Central Reformed Church and later in life, Southwest Methodist.
After retiring, Dick was a tutor for math, trigonometry, physics at area high schools as well as a well-liked courier for Chemical Bank.

Rich had many interests and hobbies including designing board games, three-dimensional chess boards and helped establish some of the local area distance races including Grandville’s Buck Creek race and the original Old Kent (now Fifth Third) River Bank run. His mind was always creating and developing new brainteasers and puzzles. An inveterate Jokester – His sense of humor never stopped. April Fool’s Day was a favorite holiday-with family frequently the recipient of his jokes and pranks.

Dick and his wife Marty moved from their long-time home (45 years) in Grandville to Maple Creek Terraces apartments . Dick helped with many projects in the wood shop and maintenance department, as well as fixing many small projects for residents.

Dick believed that everyone was family and part of a community. His belief that God has a plan for each of us carried him through to his final journey to heaven. Richard’s celebration of life with family and friends will be held at Forest Hills Presbyterian Church, Grand Rapids on July 21, 2015 at 1:00pm. A celebration service for residents at Maple Creek will be held on Tuesday, July 14, 2015 at 1:00pm.