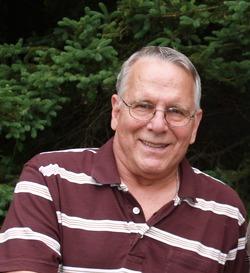 As a proud veteran of the Vietnam War, he served in the Navy before being honorably discharged in 1967. Pat went on to marry Sarah Jennings, with whom he had three children. Sarah preceded him in death in 1990.

Pat met and married Diane in 1996. He worked as a printer until retirement. Pat loved spending time with his ten grandchildren. He enjoyed making people smile, loved a good joke, and could often be heard sharing stories of his many adventures. Pat was an avid hunter and also loved working in his wood shop, making gifts for his grandchildren and friends. He had a soft spot for all children, and enjoyed volunteering his time at Base Camp and teaching Sunday school classes. Pat had a caring, tender personality, and cherished time spent with his family. He was a friend to everyone.

A memorial service will be held at 4:00 p.m. on Tuesday, February 14 2017, at Solomon’s Porch Community Church, 1675 Baldwin St. Jenison, with Jon Moore officiating.

In lieu of flowers, donations can be sent to the church in care of Base Camp or World Vision.