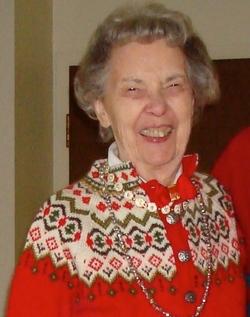 Molly Maretta Cunningham Brown
Molly Brown passed away peacefully on June 26, 2014 after dealing with Alzheimers Disease for 10 years.
Born in Detroit in 1927, Molly graduated from McKensie High School and received her B.A. in Business Administration from Wayne State University. She worked as the Director of Recruitment for the United Foundation in Detroit for fifteen years. Molly married Cyril Brown in 1951, a love story that lasted until his death in 1999.
Molly was predeceased by her father Andrew Cunningham, her mother Marion Hanson Ehn, her brother Robert Cunningham, and her husband.
She is survived by her son Kimberly Brown (Michelle Cadarette), her daughter Pamela Gavin (Joseph Gavin), her grandson Curtis Gavin, her niece Victoria Cunningham, her cousin
Maryanna Wolff, and friends who admired her sparkling and quick wit.
Molly was force of nature, with a quick mathematical and humorous mind. She worked tirelessly against her AD using humor and quips, determination and massive amounts of energy. She was a loving wife and a dedicated and loving mother. Her children adored her.
There will be a private interment at Arlington National Cemetery at a later date.