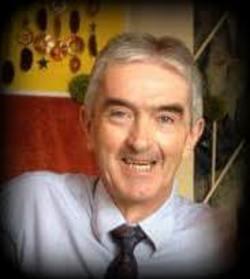 Michael Gerald Seeley, age 62, of Grand Rapids, passed away Wednesday, Jan. 13, 2016 at Spectrum Health-Butterworth Hospital after a sudden illness.  The son  James & Sheila (Gallagher) Seeley, he was born on April 11, 1953 in Holywood, Northern Ireland and was a veteran of the United Kingdom Armed Forces.

On Aug. 15, 1975, in Belfast, he married the former Yolanda Fusco.  Together they enjoyed 40 years of marriage and raised two children, while Michael worked as an engineer at Steelcase and Knoll (where he was currently employed).

He was preceded in death by his parents; and a brother, Patrick Seeley.  Surviving are his wife, Yolanda Seeley; a son, Mick (Aimee) Seeley;  a daughter, Jennifer Seeley, all of Grand Rapids;  a brother and three sisters, Paul (Pat) Seeley, Mary (Maurice) Humphries, Nuala (Trevor) Patterson, and Carmel (Alistair) Leitch, all of Northern Ireland;  his in-law’s from the Fusco family;  and several nieces and nephews.

Visitation is from 6-8 p.m. on Tuesday at Michigan Cremation & Funeral Care, 3627 Linden Ave. S.E. at 36th St. (one block west of Eastern Ave.) and from 10-11 a.m. on Wednesday at Immaculate Heart of Mary Catholic Church, 1935 Plymouth Ave. S.E. Grand Rapids, where the Mass of Christian Burial will be celebrated at 11:00 a.m. on Wednesday.  Contributions in memory of Michael may be directed to the Killgoar Foundation at Immaculate Heart of Mary Parish.

To send a message of sympathy to the family, sign Michael’s online guest book, or to share a favorite memory, please visit:  www.MichiganCremation.com