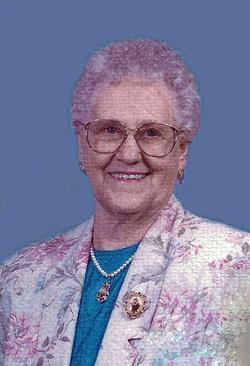 Marion Emma Kaltenberg, 89, of Crookston, MN, died peacefully early Thursday morning, January 16, 2014, in the Villa St. Vincent Nursing Home in Crookston. Marion had been a resident of the Villa since April of 2008. She was born at Tappen, ND on September 19, 1924, and was the daughter of Gust C. and Mary (Heiden) Peterson. Her early years were spent growing up in Tappen, where she attended a one room school through the 8th grade. In 1937 Marion and her family moved to Melvin, MN, near Crookston; and in 1939 to a farm near Red Lake Falls. She attended Lafayette High School and proudly earned her GED later. Marion then moved to Crookston and worked at the Sweet Shop and later at the Crookston Hotel. On September 29, 1942 she was united in marriage to Jearld Franklin Kaltenberg with the ceremony taking place at her parents farm home. Crookston became home to the couple and was where they raised their family in the house they built. Marion was employed full-time at the Polk County State Bank for a few years and then as a part-time bookkeeper for the bank until 1954. In 1966 she resumed her working career, becoming the secretary-bookkeeper for the Red River Valley Winter Shows. In 1977 she left there to assume receptionist-bookkeeping duties for the Wayne Swanson Law Office until her retirement in 1982. Jerry retired from the Burlington Northern Railroad a year later and together they enjoyed traveling, whether by car, motor-home, plane or train. Sadly, Jerry passed away on November 1, 2000. Marion was a longtime member of Our Savior’s Lutheran Church, and belonged to the Afternoon Guild and was a charter member of the Evening Guild. She also held memberships in the RiverView Hospital and Nursing Home Auxiliary, RSVP, and the Golden Link Senior Citizens Center. Marion and Jerry were honored as “Experienced Americans” in 1999. Marion was devoted to her family and will be dearly missed by all who were touched by her life.

The funeral service celebrating the life of Marion Kaltenberg will be held at 10:30am, Tuesday, January 21, 2014, in Our Savior’s Lutheran Church, Crookston, MN, with The Rev. Steve Bohler, officiating. Visitation will be in the Stenshoel-Houske Funeral Home on Monday from 5-7:00pm, with a 6:30pm prayer service, and also at the church for one hour prior to the funeral. Inurnment will take place in the Oakdale Cemetery Columbarium in Crookston.