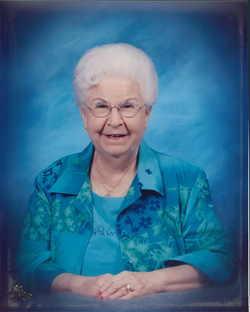 Marie B. Mosher, age 95 of Grand Rapids, passed away peacefully Friday, January 24, 2014. She was born September 5, 1918; the daughter of the late John and Bertha (Schmidt) Grady. She graduated from Creston High School in 1936 and received her Business degree from Davenport Business College. She married Robert Howard “Bob” Mosher on April 24, 1940 and together they established Valley City Sign Company in 1946. She was a member of the Second
Congregational Church of Christ. Marie was a generous and supportive mother, grandmother and great-grandmother. She was an avid golfer and dabbled in an assortment of crafts. She was a great cook and loved to bake cookies.