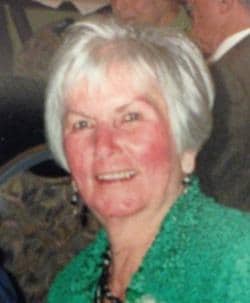 Margaret Helen Brems (Williams), age 85, of Jenison, formerly of Grand Haven, went to be with her Lord and Savior on Tuesday, December 1, 2015.

Margaret was born and raised in Grand Haven. She graduated from Grand Haven High School and shortly thereafter met and married the love of her life, Arthur. Together they raised three children and celebrated 64 years of marriage. Margaret had a zest for life and would light up the room with her feisty personality and infectious laugh. She liked playing golf, a good game of euchre and watching her children and grandchildren play sports. Margaret loved her family dearly and was a wonderful model of what a loving spouse and mother should be. She also enjoyed knitting and several years ago began knitting baby blankets for her great grandchildren that she knew she might never meet. She will be deeply missed, but never forgotten.

A celebration of Margaret’s life will be held at 11:00 a.m. on Wednesday, December 9, 2015, with visitation prior to the service at 10:00 at Holy Cross Lutheran Church, 1481 Baldwin Street, Jenison. We would like to thank Spectrum Health Hospice and American House Cherrywood for the care and affection you provided.

In lieu of flowers memorial donations may be given to the Alzheimer’s Foundation of America or Spectrum Health Hospice.