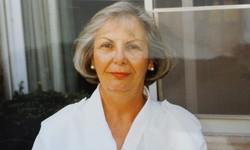 Margaret A. Hoffman, age 86, of Belding, passed away Monday, May 15, 2017 at Fulton Manor Nursing Home surrounded by family.

Margaret was born in Chicago, Illinois where she endured a tumultuous childhood.  The middle of three children, she was known as feisty and full of grit.  She was a person of action, wrapped in love.   Margaret was never one to stand on the sidelines but would jump into any situation with both feet.  As a result she was a major positive influence on many lives.  The most common comment from friends and family members was that she was a “firecracker” and their “hero”.  Margaret began supporting her family along with her sister, Betty, at the age of 15 as  self taught photograph colorists, continuing this career into the 1960’s.  At that time she returned to complete her high school education and graduate from Shapiro Nursing School in 1971.  She accomplished this while raising three children and running her household.  She worked for many years as a nurse, manger of a Health Care office, and eventually running her own business, Hoffman Health Care. She retired to care for husband who fell ill in 1991. Her strength and encouragement allowed him to live a full and relatively independent life in spite of a major stroke for 22 years. She never stopped reading and learning, and was able to finally achieve her long held desire to play piano during her 60’s after undertaking lessons. This allowed her to play her favorite hymns and simple classical music. A woman of many talents, she spent many years singing in church, at the Detroit Yacht club and for local funerals. A lover of art, boats and water, she left behind many beautiful oil paintings inspired by her time at her cottage in Lexington Michigan enjoying the ships on Lake Huron.

A memorial service will be held in Saugatuck and the home of Bryan Hoffman at a time to be determined. The family requests, in lieu of flowers donations are made in her name to: Fulton Manor – Holland Home, 1450 East Fulton Street Grand Rapids.

They were truly the “hands of Jesus” as they provided loving and respectful care for Margaret during her final days.  She will be greatly missed by all those that knew her.

Honoring her wishes cremation will take place. To send a message of sympathy to the family, sign Margaret’s online guest book, or to share a favorite memory, please visit: www.MichiganCremation.com