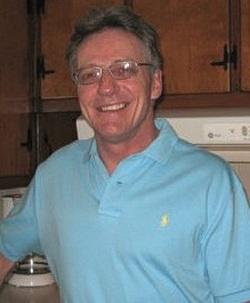 Lonny J. Morningstar, of Wyoming, age 60, passed away early morning Friday, August 28, 2015 due to natural causes. The son of Harold & Evelyn (Johnson) Morningstar he was born in August 5, 1955 in Muskegon.
From early on in Lonny’s life, everything had always been accomplished at one speed, 110mph. This showed in all aspects of his life, especially in his work. As a teenager he was introduced to body work and continued his trade until his passing. He pursued each mangled collision at full speed [at work and side projects at home] until every detail was attended to. He took great pride in being able to bring some of hardest hit wrecks back to life. Not many could match his skill-set in the collision repair business. His passion for body work and not being told what or how to do something brought him to co-owning and operating a body shop with his brother Andy in his earlier years, then later on owning and operating his own shop for over 5 years. Co-workers in the auto industry in Florida, Colorado, and here in Michigan gave him great respect for his die-hard work ethic and attention to detail.
Lonny had a quirky sense of humor and always had a joke or two up his sleeve which he thoroughly enjoyed sharing with everyone he could. And though he was well known for his quality, hard-driven workmanship and making others laugh, he was also known for his generosity and how family was everything to him. His love and loyalty to his family was what drove him to be a better man.
He will remain loved and dearly missed.
He was preceded in death by his parents, along with his sister, Ilene. Surviving is his children, Jesse (Heather) Morningstar, Tonya M. Morningstar, and Nicole Lorenzi; siblings, Russ (Nan) Schneider, Frank Morningstar, Kristina Jibson, and Andy Morningstar; grandchildren, Colton and Liberty Morningstar, and Ashlee Lorenzi;
along with the mothers of his children, Sherell Morningstar, Cindy Morningstar, and Kathy Becker.