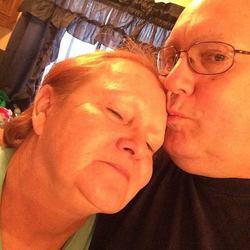 Linda Lou McIntosh, age 62, of Wayland, went to be with her Lord on Monday, October 5th, 2015 in Wayland. The daughter of Joseph & Margaret (Cornell) Keener, she was October 29, 1952 in Owosso. Linda was a devoted mother and wife, working at Lansing General Hospital in the 70’s and as a housekeeper for hotels and offices later in her life. She is preceded in death by her parents; daughter, Christina Lou McIntosh; daughter and son Amy and Ryan, who died in childbirth; and her brother’s, Richard, Buddy, and Larry. Surviving is her husband, Harry Austin McIntosh; son, Joseph Charles McIntosh; aunt, Peggy Keener; and many nieces and nephews. A Memorial and Life Celebration will take place at 2pm on Thursday, October 15, 2015 at Windsor Woods Village Community Center, 1135 W Superior St, Wayland, MI 49348, with a potluck afterword.

Cremation has taken place. Memorial contributions can be make to the family at the memorial; or to Harry McIntosh 1147 Vancouver Wayland, Michigan; or to Joseph McIntosh 21 Weston #113 Grand Rapids, MI 49503. Arrangements were entrusted to Michigan Cremation & Funeral Care, who provided excellent care for my mother and our family.